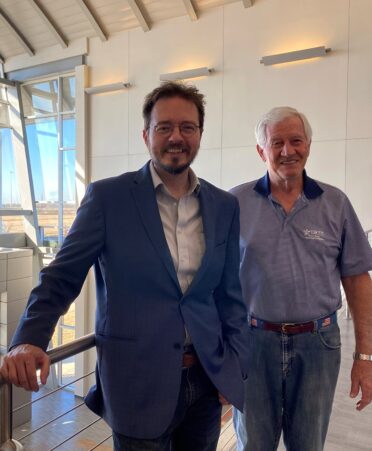 For Wooten, the transition from provost to the new position feels like a natural next step to a storied career at TSTC.

“I was sent here to do this job,” he said. “The advantage I have over anybody else is experience — I’ve done this a couple more times than they have.”

In the executive director role, Wooten will help oversee major construction and growth projects at several TSTC campuses across the state.

Wooten has served as president of TSTC’s campus in Marshall, as well as other leadership positions in the TSTC system. He was integral in establishing TSTC’s campus in Fort Bend County as its first provost.

“Some of the most important events or achievements realized by TSTC during the past 20 years have been possible because Randy Wooten played a major role in accomplishing them,” TSTC Chancellor & CEO Mike Reeser said.

Wooten looks forward to continuing to make an impact on the communities that TSTC serves.

“I like to make good things happen,” he said. “If a man or woman can look back on their career and say, ‘I made some great things happen that made a difference in people’s lives,’ what more can you really ask for? That, to me, is a great legacy.”

Wooten is particularly proud of the relationship between TSTC’s Fort Bend County campus and the community it belongs to. The open-door policy is one he has worked hard alongside Bowling to maintain.

Wooten said Bowling is well prepared to take on his new role.

“From my military background, you should be training your replacement along the way,” he said. “Bryan is a natural. I knew sooner or later that he was going to get the call. I wanted him to be ready.”

Bowling began his TSTC journey as a student, enrolling in the Computer Networking and Systems Administration program at the college’s campus in Waco. While he had professional experience in the information technology field — and in 3D animation and video — he knew that going to college would set him up for a stable career.

“I needed a degree,” he said. “I needed a piece of paper saying I really know what I know.”

While he was training to earn his degree, Bowling was approached to become a student worker in the college’s IT help desk.

Bowling has been working for TSTC ever since.

“It was never part of the plan,” he said. “Life happens while a man’s making plans. My original trajectory was completely different — I thought I would be an IT specialist working for some big company. It all went out the door when I came to TSTC. I just fell in love with it.”

During his final semester as a student, Bowling was offered a full-time position as a TSTC technician and project manager. After a year, he transitioned into teaching at the college. He said yes to becoming a department chair and continued to hold leadership positions before becoming associate provost at TSTC’s Fort Bend County campus at the end of 2018.

As the new provost, Bowling hopes to continue to foster the sense of family on campus. He also looks to continue supporting faculty and staff members in TSTC’s mission: placing more Texans in great-paying jobs. That includes continued implementation of TSTC’s performance-based education, which allows students to train at a flexible pace.

“We are upholding the chancellor’s vision of the college,” he said.