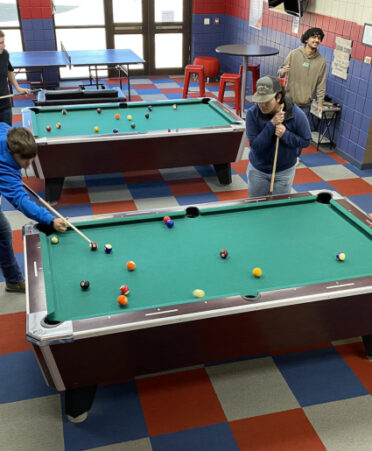 (SWEETWATER, Texas) – More than 70 students who live on Texas State Technical College’s Sweetwater campus were welcomed back over the weekend.

For many other students, Monday. Jan. 9, was the day they were introduced to the curriculum for the spring semester at TSTC in West Texas. Jan. 9 was the first day of classes for students at the Abilene, Breckenridge, Brownwood and Sweetwater campuses.

Jose Navarrette, housing director at TSTC in Sweetwater, said 76 students will live on campus this semester.

“That is a really good number for our spring semester,” he said. “It was good to see some returning faces, as well as some new students beginning their journey. Our move-in process this semester was really smooth.”

“Everyone was ready to get back to school and get to work,” he said. “We had no major issues during our move-in weekend.”

Dirickson, who is a student in the Electromechanical Technology program, said he met many of the students for the first time.

“A lot of the new students are really cool. I see a lot of potential for them to be successful at TSTC,” he said.

Quintin Tucker, of Salina, Kansas, said he enjoys staying in the dorms.

“The rooms are a lot larger than you would think,” he said. “It is good to be back on campus and working toward my degree.”

Tucker, who is studying for an Associate of Applied Science degree in Automotive Technology, said he had been counting down the days when he could be back in TSTC’s lab.

“I enjoy going to school and cannot wait to begin the course covering engine systems,” he said.

Tucker said he kept in touch with classmates during the break to make sure they were doing well.

“It was good to stay in touch with everyone, but it was better today when we were able to reconnect in the lab,” he said.

Aaron Turnbough, of Big Spring, said the Diesel Equipment Technology instructors kept him busy the first day back in class.

“I have not felt like I have been dragging so far,” he said. “I can say we have all been busy, and it has been a good busy. We learned a lot, and it is only the first day.”

After the first few hours of class, many students made sure to visit TSTC’s Student Center game room and gym for a break. Some students spent time playing pool or basketball, while others went to the gym for a workout.

Joni Coons, TSTC’s leadership coach for Residence Life and Engagement, has planned many activities for the students this semester. These include ax throwing, cornhole, a hot dog eating contest, laser tag, a Madden NFL video game tournament, and washers.

“We plan on offering students different activities to keep them engaged with campus life,” she said.