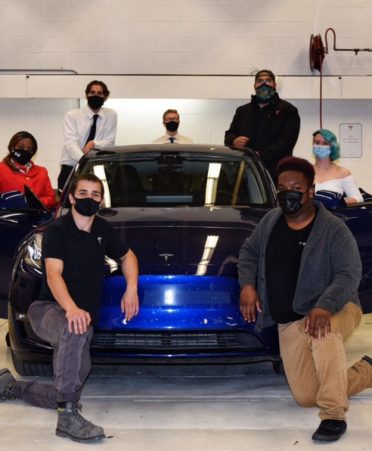 The TSTC students began the 12-week training program in January to learn the skills necessary to become advanced electric vehicle technicians at Tesla. As a Tesla-paid hourly internship, the students developed technical expertise and earned certifications through a blended approach of in-class theory, hands-on labs and self-paced learning.

The program’s classes are held at the Kultgen Automotive Center on TSTC’s Waco campus.

“We are excited and proud of the third graduating class from the Tesla START program in Waco,” said Adam Barber, TSTC’s interim executive director of Workforce Training. “We look forward to the next class and continued partnership with Tesla.”

Mark Tosto, a Tesla START program instructor, said he was proud of the work the students did during the training period. He said a highlight for the students was working for two weeks at a Tesla Service Center in Oklahoma.

Vest said he has been interested in Tesla’s work since he was 16. When his plans fell through to study electromechanical engineering in Alaska, he searched online and came across the Tesla START program.

“I wanted to be somewhere warm for the first time,” he said.

Vest said he gained an appreciation during the program for the quality that goes into constructing every Tesla vehicle. He said he looks forward to exploring the East Coast as he moves in mid-May to Massachusetts to begin work at a Tesla Service Center.

Byrnes not only completed the Tesla program during the spring semester, but he also finished an Associate of Applied Science degree in Automotive Technology at TSTC. He had online classes for the semester, enabling him to devote time to learning about Tesla’s vehicles.

“Getting into the theory of the cars and the engineering was cool,” he said.

Byrnes will move in mid-May to California to work at a Tesla Service Center.

McKamey studied automotive technology while taking dual credit classes in high school and earning an associate degree at a two-year college in the Corpus Christi area. Her high school classes sparked an interest in electric vehicles.

The program expanded her knowledge of what she said is the future of transportation.

“I loved it,” McKamey said. “I went from not knowing how to unlock and lock a vehicle to tearing it apart.”

She will be relocating in mid-May to Utah to work at a Tesla Service Center.

There are currently seven other Tesla START partnerships with colleges in California, Florida, New York, North Carolina, Ohio and Washington. The program launched in 2019 and has had more than 300 graduates to date.

The program’s 2021 cohorts in Waco are full, but interviews for 2022 cohorts are taking place, Tosto said.