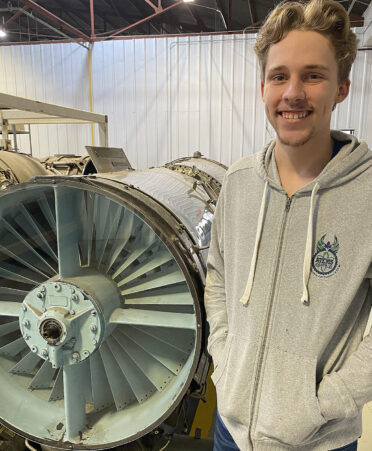 (ABILENE, Texas) – Jayden Hummel has always been fascinated with technology.

The son of a former Air Force mechanic, Hummel is hoping to honor the memory of his late father by earning Associate of Applied Science degrees in Aircraft Airframe Technology and Aircraft Powerplant Technology at Texas State Technical College.

“I know that he is proud of me,” Hummel said of his father. “I was able to watch him work in the Air Force, and what he did was always intriguing.”

Hummel’s father worked on the hydraulic systems of B-1 Lancers at Dyess Air Force Base in Abilene. He said the progression of technology is what led him to TSTC.

“We, as people, had to learn to survive in the wild by using sticks and stones,” he said. “Now we are able to fly in the sky, and the technology is only going to improve and grow.”

The ATEMS (Academy of Technology, Engineering, Math and Science) High School graduate knew that TSTC offered aviation programs. After his first tour of the college’s Abilene campus hangar, Hummel knew where he wanted to continue his education.

“I have never been in a professional hangar before with this many planes,” he said. “The Air Force hangars only had one plane, and many of the others I have been in were for one plane. This hangar and the planes we have are great to learn on.”

Hands-on lab sessions are Hummel’s favorite part of the curriculum. He said they fit his learning style.

“I am a big visual learner,” he said after working in the cockpit of one plane.

“Our students learn so much by working together in the lab,” he said “We want them to work together and solve the problems we have in class.”

Hummel said he is looking forward to the advanced classes, especially when he will learn the ins and outs of a jet engine.

“I cannot wait to get in there and work on those engines,” he said. “The experiences we have are great and will only get better.”

Hummel said the instructors make sure that students know what is going on both in class and in the industry.

“They teach us so much more than what we learn in the book,” he said. “The book may illustrate the way to do something, but our instructors have working experience and can recommend doing it a different way for better results. That working experience is the best way for all of us to learn.”

After earning his degree, Hummel said he will have many options, from being employed as a technician at an airport to working for a private company.

“I know no matter which way I go, I will be able to work because TSTC is preparing me for a career,” he said.

The need for aircraft mechanics in Texas is forecast to grow 8% by 2028, according to onetonline.org. The average salary for a technician is $66,260, the website showed.