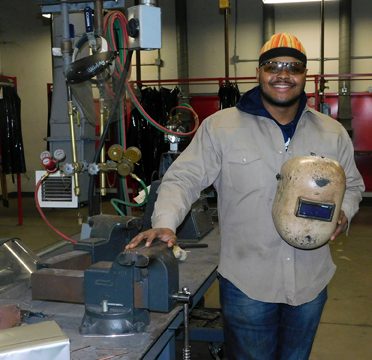 TSTC alum forges a future back in the classroom

(ROSENBERG, Texas) -From student to instructor, Jerroll Hodge is back at Texas State Technical College in Fort Bend County and is ready for his new role.

Hodge graduated from TSTC in Waco in 2016 with an associate degree in Welding Technology and said he never imagined he would return to the college in this capacity.

“I’ve had a passion for the art of welding since high school, but it wasn’t until recently when I began to think about teaching,” said Hodge. “I have learned so much out in the field that I want to share with younger welders.”

The 24-year-old worked as a welder with National Oilwell Varco, a leading provider for equipment and components used in oil and gas drilling, before getting hired as a Welding Technology instructor.

“This is new territory for me. This is my first time as an instructor, but everyone has been so helpful and welcoming,” said Hodge.

Hodge has more than five years welding experience under his belt. He began welding barbeque pits and trailers, among other things, his junior year in high school competing against other students and continued on into college working part-time as a welder while he was in school.

“I was undecided about college until I started welding,” he said. “I figured I’m good at it, I love it…why not pursue it as a career. Welding to me isn’t a job, it’s fun.”

When Hodge was researching colleges, he had a family member attending TSTC and it was an invite to the campus in Waco that helped him decide it was the right place for him.

“It was the perfect fit. I knew it was where I was supposed to be,” said Hodge. “The instructors were amazing in how they taught us and shared their real-world experiences with us. They supported us and really pushed us to be our best. I want to be that for my students now.”

The Huntsville native said he hopes to become the instructor that students feel comfortable going to for advice about welding or life.

His goal is to bring all of his knowledge forward to ensure that he can mold and create great welders for the industry.

“I had a job before even graduating and that’s my goal for these students,” said Hodge. “I want them to be as prepared, if not more, than I was when I entered the field.”