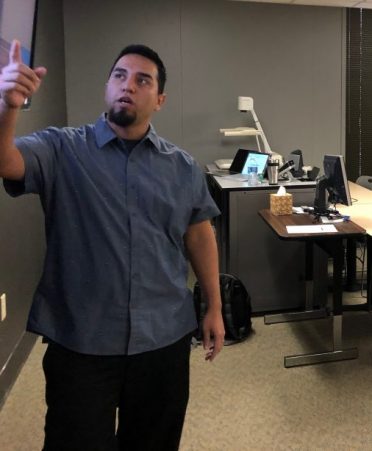 (ABILENE, Texas) – Computers and water don’t mix. But water — too much of it — was what led Texas State Technical College alumnus Tony Torres to pursue his passion for computer programming.

“After my wife finished school, the plan was for me to go (to college). But the day she was supposed to start her new job, our house flooded,” Torres said. “It was a blessing in disguise because I couldn’t juggle fixing the house, going to school and working full time. So we decided that the house and (my) education was a priority.“

During the two years that Torres studied for an Associate of Applied Science degree in Database and Web Programming at TSTC in Abilene, he also repaired the couple’s home.

Then, in the last semester before his 2016 graduation, he caught pneumonia.

“My brother had to drive me to my final project because I was wheezing so bad that I couldn’t drive,” Torres said. “But my final project was something nobody in our class had done before, and I wanted to present.”

Torres’ final project, based on an idea from his wife, was an IOS grocery app that helps create recipes, keeps users on budget and sends reminders about potentially expired foods.

“I like to challenge myself, and this was a different type of computer language than what we had studied. But I know my craft and had the tools to do it,” Torres said.

Despite multiple obstacles, Torres’ dedication made him stand out to his instructors, and he was awarded the Outstanding Graduate Award and the Provost Award.

“Tony was an excellent student,” Julie Rhoades, Database and Web Programming master instructor, said. “He worked hard and if he started something, it got done.”

After graduation, Torres remained in contact with his instructors while honing his skills as a freelancer. When a position for a Database and Web Programming lab assistant opened up at TSTC in Abilene, he got the job. He is currently working on a bachelor’s degree to become an instructor.

Torres said his instructors were an inspiration to him, and that’s what he hopes to be for his students.

“I love teaching,” he said. “I believe in what we do, and that’s changing lives.”

Torres encourages anyone interested in problem-solving to pursue the DWP program.