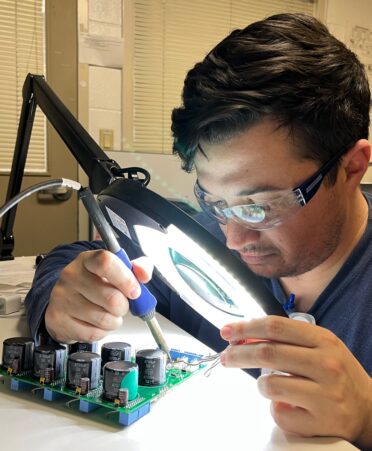 (HUTTO, Texas) – For Peter Wilson, of Georgetown, it is the best maintenance job he said he has ever had.

“It’s something new every day, and we are constantly learning,” he said.

Wilson, a graduate of Texas State Technical College’s Industrial Systems – Mechanical Specialization program in East Williamson County, is a mechanic at ICU Medical in Austin. He began working at the company through a paid apprenticeship program launched by TSTC and ICU Medical at the start of the fall semester in 2021. He and three other students were hired full time after graduating with associate degrees last December.

“Not only has the internship been beneficial to the students who participated, but it has had a domino effect within the program,” said Lance Antilley, an instructor in TSTC’s Industrial Systems program. “It has brought attention to the program and brightened the light at the end of the tunnel for prospective students.”

Wilson remembers the first day of his apprenticeship.

“It was mind-blowing,” he said. “I had never seen anything like these machines.”

Wilson said he chose the medical field to pursue because of job security and a continuing need for IV bags, which the company produces and ships nationwide. He works in the company’s overwrap section and is on the production floor, working on machine adjustments, troubleshooting and preventive maintenance. On some days he works on smaller equipment in a cage-like work area.

Before Wilson enrolled at TSTC, he was a preventive maintenance mechanic and worked in law enforcement.

“The trades are a dying breed,” he said. “Literally all my family are mechanics or electricians.”

Jason Nixon, a maintenance manager at ICU Medical, is a graduate of TSTC’s Air Conditioning and Refrigeration program, now known as the Heating, Ventilation and Air Conditioning Technology program. He was one of the company’s representatives who worked with TSTC’s Industrial Systems program to start the apprenticeship program.

During the apprenticeship, students learn about safety measures, preventive maintenance and working with a maintenance management system, while learning alongside experienced equipment mechanics. Some of the equipment the students work on includes fabricators, filling machines, mixers and overwrap equipment.

Nixon said TSTC is a pipeline for a readily available workforce. A lot of the equipment and software that students work with in labs will be seen once they enter the workplace.

He said TSTC students can think big when they go to work in the industrial systems field, whether it is at ICU Medical or other companies.

“If you are good enough and push yourself, you can be a consultant or a supervisor,” he said. “You get what you put in.”

Nixon said the next group of Industrial Systems students the company will employ as interns will be among those enrolled during this year’s fall semester.

“My goal is to keep this going for every semester they (students) are available,” Nixon said. “I want them. We are always going to have openings.”

Nixon said some of TSTC’s other programs statewide that tie into the company’s work include Automation and Controls Technology, HVAC Technology, Occupational Safety and Environmental Compliance, and Robotics Technology.

TSTC’s Industrial Systems program is part of the Money-Back Guarantee. Students in their first semester are eligible to sign up for free with campus Career Services representatives. Students are able to take part in workshops to learn about resume writing, interview techniques and other employment skills. Students who are not hired in their field within six months after graduation may be eligible to get a tuition refund for their time at TSTC.

For more information on ICU Medical, go to icumed.com.