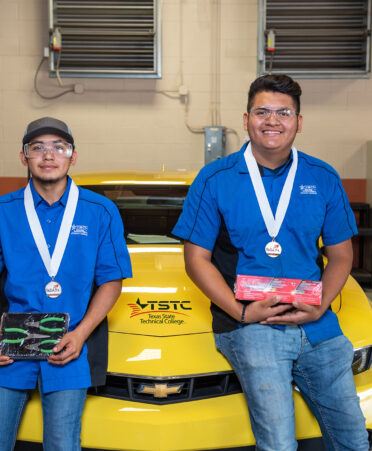 (HARLINGEN, Texas) – The challenges may have looked a little different due to the pandemic, but that did not keep two Texas State Technical College automotive students from excelling during a recent SkillsUSA competition.

Normally, students at TSTC’s campus in Harlingen would travel to compete at that level in SkillsUSA. But since the COVID-19 pandemic has restricted travel, both students wore GoPro cameras to allow instructors and judges to monitor their progress from Harlingen.

“I liked it. It was pretty fun,” Gaspar said of the revised competition that included the video recording.

Gaspar was inspired by his father to get into the automotive industry.

“He has an old-school truck,” he said.

After Gaspar got a job as a diesel mechanic, he decided to return to school for additional training. Friends who had gone to other colleges in the area warned him that there was very little hands-on training available at those schools. That is when his mother told him about TSTC.

“I didn’t even know TSTC was here in Harlingen,” Gaspar said. “When I got a tour, I got interested.”

Ramos decided to pursue his degree in Automotive Technology at TSTC to fulfill a lifetime love of fixing things.

“I get satisfied when fixing stuff and watching them run again — especially cars,” he said. “I like cars, trucks, everything like that.”

Ramos decided to enter into the SkillsUSA competition after hearing about it from a TSTC instructor. He figured it might look good on a resume.

“I would say it was a pretty cool program,” he said, recalling how he had been tasked with diagnosing electrical problems during the competition. Ramos went on to earn 13th place in SkillsUSA’s national competition.

Given the modifications to the competition required by the pandemic — and the extra rigor involved in preparing to compete — TSTC Automotive Technology instructor Miguel Zoleta said the students’ achievement was remarkable.

“It says a lot about ourselves — the instructors and students, both,” he said. “It takes a lot of dedication. It’s something out of the norm because it’s not something they do during class time. We have to make preparations to come in, to see what they could see in the state level. Some of them, they haven’t covered these areas, and everything is new to them. It shows that our students were able to accomplish something great.”

SkillsUSA is an organization dedicated to ensuring that the United States has a skilled workforce through a partnership of technical students, teachers and industry partners. Its annual competition celebrates technical students’ skills while assessing their knowledge through performances, tests and challenges.