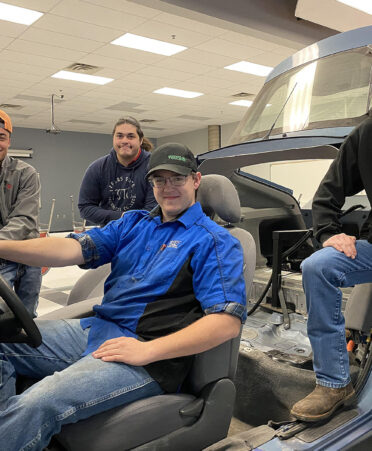 Joseph Fredericks, Brady Kennemur, David Lopez-Cortez, Patrick Rodriguez and Tanner Tankersley agreed that their time in the lab taught them more than just skills they need to repair vehicles.

“I learned the value of teamwork, which is something I did not always practice before starting the program,” Kennemur said. “Working in the lab showed me that working together would be a good way to solve problems.”

That teamwork led to friendships that will last beyond graduation.

“I know that we will keep our friendship past graduation. We have formed a unique bond,” he said. “We have worked on all of the vehicles in the lab together and hang out after class talking about projects and what we have going on.”

Tankersley said they will continue to talk after school, especially when it comes to helping one another while they are working.

“We will always reach out to each other, especially if we need help on something we are working on,” he said.

Kennemur said they will benefit from one another’s expertise.

“I am more of a Ford guy, and Brady is a Chevy person,” he said. “I know when I am on the job, I can call any of them for their help, and they know they can call me.”

Rodriguez said he was hesitant to ask his classmates for help when he started. He quickly learned it would be the best way to succeed in the program.

“We went to lunch together one day, and it all kind of clicked,” he said. “We wanted to be successful together and made sure we worked to help each other.”

Rodriguez said watching his classmates work motivated him to do better.

“I wanted to work just as hard as them and show people I could finish our projects,” he said. “It was the motivation I needed to complete the program.”

“They wanted to make sure everyone is on the same page and able to do the job,” he said.

Lopez-Cortez also has seen the value of teamwork and trusting classmates and instructors.

“We are always willing to help each other with projects,” he said. “Gerod makes you feel confident in your decisions, but he is also there when you have a problem. He wants you to succeed.”

The five students are candidates to receive certificates of completion in Automotive and Light Repair at TSTC’s Fall 2021 Commencement to be held December 13 at the Abilene Convention Center.

The need for qualified automotive service technicians and mechanics is expected to grow in Texas over the next several years. According to onetonline.org, Texas has more than 60,000 technicians employed around the state, and that number is forecast to top 65,000 by 2028. The average annual salary for a technician in the state is $45,520.

Registration for the spring semester at TSTC is underway. For more information, visit tstc.edu. 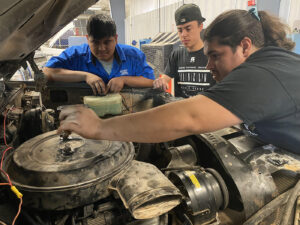