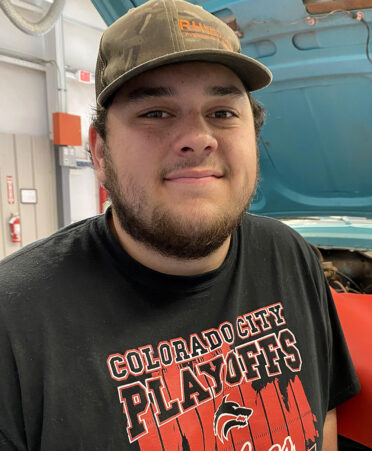 “He always told me, ‘If someone built it, you can work on it.’ That is how I fell in love with working on anything with an engine,” Beavers said.

Beavers is studying for a certificate of completion in Automotive Maintenance and Light Repair, with plans to work on bigger engines in the future. He was no stranger to the TSTC program after completing the dual enrollment curriculum while attending Colorado High School.

“I have been in this shop for three years now,” he said. “I was able to learn a lot of the basics, and it was fun. I decided to keep going by coming to school here. I have not regretted my decision.”

When Beavers is not in class, he is helping his grandfather and father at the Westbrook Volunteer Fire Department. In addition to being a volunteer firefighter, Beavers performs routine maintenance on the department’s trucks.

“After working on the fire engines and brush trucks, I want to work for a company that will allow me to learn more about the bigger engines,” he said.

TSTC instructor Gerod Strother said Beavers will be a valuable asset to anyone who hires him after he graduates in December.

“He is so loyal and willing to do anything he can to learn,” he said. “He wants to know how to do things and do them right the first time. That is a great quality for a mechanic.”

Beavers’ knowledge of how a vehicle operates is expanding beyond the basics that he learned as a dual enrollment student.

“I have been able to learn more about the air conditioning system and electrical components,” he said. “I did not realize how much that would be involved in the program.”

Another aspect of the curriculum that he has found interesting is something that he has done before, but on a much smaller scale.

“I figured it would be pretty hard to tear down an engine, but after getting started it was fun to do that kind of work,” he said. “I have experience breaking down small engines like dirt bikes, but never a car engine.”

Beavers credits his instructors for teaching him specific techniques.

“They really are here to make sure we succeed,” he said. “I have learned so much that my grandfather is asking me to come to his house and help him work on his cars.”

Beavers said his father is also excited to see him achieving his dream. They are working on a 1967 Plymouth in their spare time.

“I like working on classic cars and doing it with my dad,” he said.

Beavers also talks to his friends about the dual enrollment opportunity, and he hopes more students take advantage of it.

The need for qualified automotive service technicians is expected to grow in Texas over the next several years. According to onetonline.org, Texas has more than 60,000 of these technicians employed around the state, and that number is forecast to top 65,000 by 2028. The average annual salary for a technician in the state is $46,680.