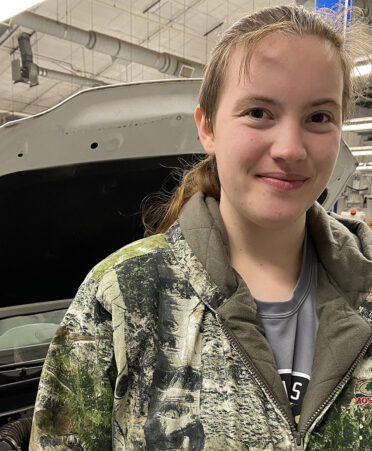 TSTC Automotive Technology student is ‘grease monkey’ among her sisters

(SWEETWATER, Texas) – Rachel Wood-Rush has always been around vehicles.

“I have been helping my father work on cars since I was eight,” she said. “I am the grease monkey of all my sisters. I have been my father’s go-to person when it comes to cars.”

It is only natural that Wood-Rush, of Stephenville, would make working on vehicles a career. She is studying for an Associate of Applied Science degree in Automotive Technology at TSTC.

Her family and friends continually ask her to work on a vehicle after learning that she is expanding her knowledge.

“I have friends asking me to work on a switch in their car or to fix something else that is going wrong,” she said. “I do not mind at all because I enjoy working on vehicles.”

“She is very motivated to get the job done,” he said. “I see her having a good career in the industry. She is so willing to help others, and she loves to get involved in everything. She is eager to learn.”

Some areas that Wood-Rush wants to know more about are air conditioning systems and vehicle engines.

“Those are two areas I have had some trouble with,” she said. “I want to get in there and learn more about everything in the vehicle.”

To help her learn more, Wood-Rush makes sure to listen to her instructors and classmates before, during and after class.

“It is good we can come in here and talk about cars — or just about anything,” she said. “We all get along well, and that makes learning better.”

She also enjoys talking to Strother and his fellow instructor William Parker.

“They teach very well and want to make sure we know what is going on,” she said. “We go into our groups and get to work. But it is also good that we can break off and work with different people and learn from them.”

Having a positive relationship with the instructors eases Wood-Rush’s mind while she is planning a summer wedding.

“The instructors have been so understanding about it,” she said. “I am going to miss a week of school, but they told me what to expect so I can catch up. It is good to have that kind of relationship.”

When she completes her degree, Wood-Rush hopes to work in a shop in Brownwood, but another goal will be in reach after that.

“I want to be able to open my own shop along with my dad,” she said. “That would be exciting for me and for him.”

The need for qualified automotive service technicians is expected to grow in Texas over the next several years. According to onetonline.org, Texas has more than 60,000 of these technicians employed around the state, and that number is forecast to top 65,000 by 2028. The average annual salary for a technician in the state is $45,520.