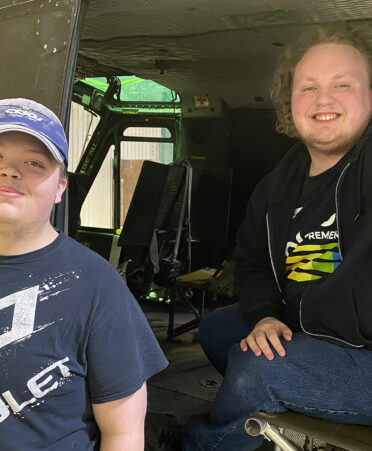 (ABILENE, Texas) – For two Texas State Technical College aviation students, the past is their future.

Colby Northcutt and Matthew Voss, both of Abilene, want to follow the example of Nelson Ezell, founder of Ezell Aviation in Breckenridge. Ezell had a passion for preserving and maintaining World War II-era aircraft.

In honor of her late husband, Dude Ezell established a scholarship for TSTC Aircraft Airframe Technology and Aircraft Powerplant Technology students at the Abilene campus. Northcutt and Voss were the first two recipients of the scholarship, which was presented by The TSTC Foundation.

“We were sitting at lunch with (TSTC’s senior field development officer for West Texas) Delton McGuire, when Mrs. Ezell called him,” Northcutt said. “She saw both of our essays and could not decide between the two of us. She said she loved our resolve and wanted us both to have the scholarship.”

McGuire said Northcutt and Voss were perfect fits for the scholarship.

“It was a pleasure to help two well-qualified and highly recommended students receive an award acknowledging their past academic efforts, knowing they would become great technicians in the aviation field after they enter the workforce,” he said.

Northcutt, who is originally from Snyder, and Voss both share a passion for vintage aircraft. They were able to see Nelson Ezell’s passion when they toured Ezell Aviation with Mrs. Ezell.

“Seeing those aircraft is why we both wanted to work in the aviation industry,” Voss said. “We want other people to experience the same joy looking at the older aircraft like we do.”

Northcutt wants to be responsible for preserving aviation history.

“We are losing the history of that time,” he said of World War II-era aircraft. “The older generations are dying off, and if I do not do my part to preserve the history, these pieces of our history will eventually do the same.”

Both students heard war stories from their grandfathers, which also led them to choose careers in aviation.

“My grandfather and his dad both worked for Delta Airlines. I have seen pictures of my grandfather working on Navy aircraft,” Voss said. “I love looking at the old planes, hearing the sounds they make. The thrill of standing next to one is what makes preserving them great.”

Northcutt said his grandfather would often talk about his time in the Vietnam War. That was one of the reasons he decided to write an essay for Mrs. Ezell to review.

During their tour of Ezell Aviation, the students learned that the past is always in front of them.

“There is so much finesse that goes into repairing these older aircraft,” Northcutt said. “They have to use the technology from that time to make the needed repairs. It is not the same process as we have today. It is amazing to see what they do there.”

Both students said they value the compassion that Mrs. Ezell showed them in presenting them with the scholarship.

“This scholarship means a whole bunch. Being able to get what I want to do and enjoy working on these aircraft, it basically has allowed me to continue going to school,” Voss said. “It means more than the world to me to do this in honor of someone that did so much for the aviation world, but more so because it’s allowed me to keep doing what I want to do.”