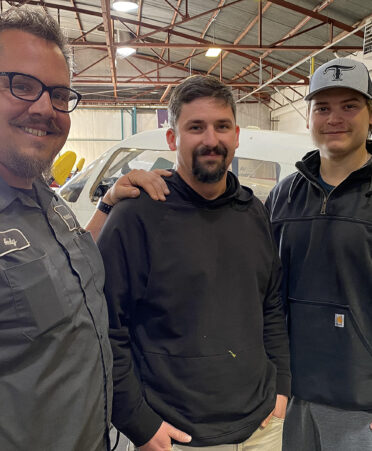 A fleet of air tankers was staged at Abilene Regional Airport to help fight the Eastern Complex fire and the Eastland Complex fire during the week of March 17. Three Texas State Technical College Aircraft Airframe Technology and Aircraft Powerplant Technology students worked behind the scenes to help fuel the planes.

Kevin Bradley, Caul Erwin and Andy Smith, all of whom work for Abilene Aero and are studying for Associate of Applied Science degrees at TSTC, spent their time at work that week facing quick decisions.

“To me, it was a really busy workday,” said Bradley, of San Diego, California. “It was a constant day of (fueling) the tankers so they could go out there and fight the fires.”

Smith, of Abilene, said helping to fight the fires was rewarding. He compared it to his time in the U.S. Navy.

“I was involved in a lot of search and rescue missions. We knew what the mission was and knew we had to get the job done,” he said. “When we heard that evacuation orders were in place, we knew it was serious.”

Smith said the fire came within 20 miles of his home in Lawn, so he knew what needed to be done.

“We knew we had to save people’s homes, farmland and equipment,” he said, adding that his home was not damaged by the fire.

Erwin, of Lubbock, said his time at work was rewarding, but also busy.

“I would call it controlled chaos,” he said. “But we worked together to get the job done.”

In addition to the tankers, Smith said the crews also had to refuel spotter planes that were used daily.

“They would go out and look for hot spots and other hazards so the tankers could drop their powder on them,” he said. “They were just as important as the tankers.”

Erwin said no advance notice was given about what would be happening, but by attending TSTC and working for Abilene Aero, everyone was prepared.

“Just like we learn here at TSTC, teamwork is important,” he said. “We work together in class to make sure everyone is prepared. We used that same method during the days we worked to help battle the fires.”

The fire season threat is not over in West Texas, so the three students know they have to remain vigilant.

“We have to be ready for anything,” Smith said. “There is usually one tanker at the airport, but we have four on standby to fight the fires, which are still going on right now.”

The need for aircraft mechanics and service technicians in Texas is forecast to grow 8% by 2028, according to onetonline.org. The average salary for these technicians in the state is $66,260, the website showed.