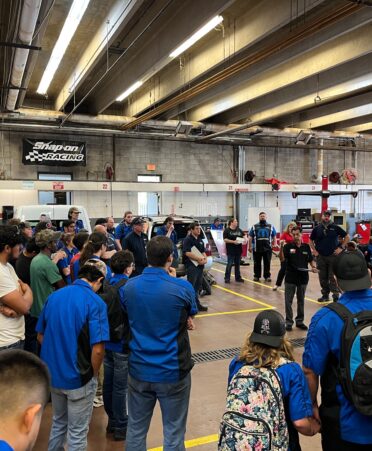 “We have students who are so excited, both new and returning,” said Jerome Mendias, associate provost of TSTC’s Waco campus.

The Automotive Technology program and the Electrical Lineworker Management and Technology program both began classes as part of TSTCYou, which meets students where they are through a flexible, performance-based education (PBE) that works with busy schedules.

In the performance-based education model, students work with an enrollment coach to develop a schedule in two time blocks. Lectures, videos and other learning content is on Canvas, a learning management system. Instructors also do mini-lectures during the day, with tests being demonstration-based, either online or written.

Mallory Castilleja, a PBE mentor, attended a morning orientation for several Automotive Technology students. She said 11 PBE mentors were hired for TSTC’s statewide campuses, with their role being to help students not fail their classes due to such problems as poor attendance or lack of effort.

Due to the start of the PBE model, the Kultgen Automotive Center was closed last December for needed remodeling. Students were greeted on Monday with brighter lighting and larger automotive labs in the newly renovated space. The program also has a new virtual reality room where beginning Automotive Technology students can do lessons, said Rudy Cervantez, TSTC’s statewide chair of the Automotive department.

Cervantez said with the start of PBE, faculty will be available from 8 a.m. to 10 p.m. on Mondays through Fridays to work with students.

“It’s going to be an exciting experience for the students,” he said.

“The more time I can be at home and learning in the shop, it is more flexible,” she said.

Christopher Rhymes, of Temple, is in his third semester pursuing a certificate of completion in the Automotive Technology program. He said he liked the building changes because it felt more like an automotive shop environment.

Other programs are experiencing their own changes starting this fall.

The Computer Networking and Systems Administration, Cybersecurity, and Drafting and Design programs opened new labs in the on-campus Dr. Roy G. Dugger Center. This marks the return of the programs to the campus in a hybrid format. The programs will continue offering the all-online learning that began in spring 2020. .