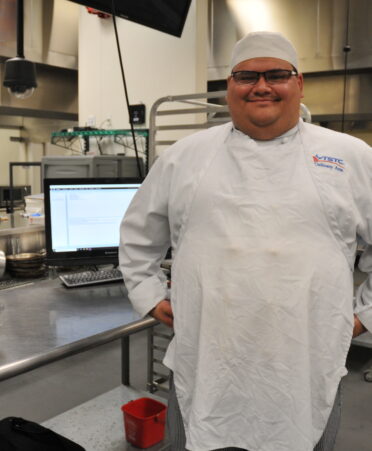 TSTC candidate for graduation excited about future in culinary profession

Students in the Advanced Pastry Shop class were tasked with making almond cake petit fours, opera petit fours, and pate a choux, an egg-based bread for cream puffs, swans and eclairs. Bohannon graded the tasty treats on presentation, including coatings, color and height.

But this was not a problem for Christopher Gonzalez, of Round Rock, a Culinary Specialist certificate candidate for graduation in the Culinary Arts program this summer at TSTC. He was not overwhelmed with the assignment, just like he said he was not on the first day he started classes on campus.

“He is always motivated and excited to be in class,” Bohannon said.

Gonzalez said he has enjoyed getting to know people and learning new recipes at TSTC. He said he enjoyed learning to make pate a choux and vanilla ice cream in his classes.

“Both instructors (Nelson Adams and Bohannon) are the best I have ever met before,” Gonzalez said.

Adams, who is also associate provost of TSTC’s East Williamson County campus, said Gonzalez is a positive influence who makes a big impact in whatever he does.

“He radiates positivity in the kitchen,” Adams said.

Gonzalez’s work ethic has also been put toward the Special Olympics, in which he has taken part for 12 years. He has participated in basketball, bowling, powerlifting, swimming and track events, and this fall he will add flag football.

Gonzalez became interested in culinary arts when hearing about it through the Round Rock Independent School District’s Community Works program, which enables students ages 18 to 21 to gain employment, take part in community recreation activities and use public transportation. Gonzalez is a graduate of Stony Point High School in Round Rock, but he took part in the program after graduation at Cedar Ridge High School in Round Rock.

Art Kalifa has worked with Gonzalez in the Community Works program.

Gonzalez has a job as a line cook at Kalahari Resorts Texas in Round Rock. He also works with other kitchen staff during the facility’s special events.

Gonzalez wants to pursue an associate degree in TSTC’s Culinary Arts program. His goal is to be a sous-chef and work at the Walt Disney Co. in Florida.

“I know he has a bright future ahead of him,” Kalifa said.

TSTC will have its virtual graduation celebration at 5:30 p.m. on Thursday, Aug. 19, on the East Williamson County Higher Education Center Facebook page.

Registration continues for the fall semester, with scholarships available. For more information, go to tstc.edu.