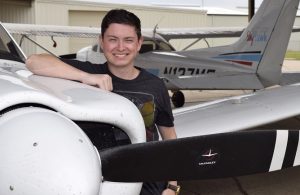 TSTC candidate for graduation looks to the sky for his career

“It is eye-opening, especially now that I’m close to graduating,” said Rensing, a student at Texas State Technical College from McKinney. “I’m realizing my dreams are coming true. It’s cool to see how things have come together.”

Rensing is a candidate for graduation for an Associate of Applied Science degree in Aircraft Pilot Training Technology at TSTC. He joins more than 500 candidates for graduation receiving associate degrees and certificates at TSTC’s Spring 2019 Commencement at 6:30 p.m. on Tuesday, May 7, at the Waco Convention Center.

“I have made a lot of really close friends,” Rensing said. “It is rare to find others your age that are interested in the same thing you are. I have enjoyed the friendship and the teaching environment and the knowledge I have gained.”

“He knows pilots, and that can help a lot,” she said. “He is coachable and can take criticism.”

Rensing’s early exposure to aviation was through his father’s employer who had a company jet and also through traveling with his family.

“I wondered about the science of it,” Rensing said.

When Rensing was young, he would ride his bicycle to watch airplanes land and take off in McKinney. At 13, he flew in the passenger seat of an airplane with a private pilot for the first time, and three years later he started pilot lessons.

“He would hang out with pilots at air shows,” Curtis said. “He would talk to anybody. Everything started to click. When he started flying, it was interesting seeing the transition from freshman to when he earned his pilot’s certificate before his high school graduation.”

Curtis said the academy is a great way to expose students to the aviation industry before entering college.

“I think it is a great way to inspire,” he said. “I don’t know that everybody understands how you get a job in aviation. It exposes not only the kids that are interested, but they talk to their friends. It builds chatter about a much-needed career field.”

After his graduation from TSTC, Rensing will start certified flight instructor instrument classes with American Flyers in Addison. Later this year, he will work at TSTC as a flight instructor and pursue an online Bachelor of Science degree in Aviation Science: Professional Pilot at Texas A&M University – Central Texas.

“Whenever you are teaching the next generation of pilots, it’s cool to give them your knowledge,” Rensing said. “I get to instruct while flying, which is the best part.”

Rensing is in the Envoy Air Cadet Program, which he hopes will be his flight path to becoming a pilot for American Airlines.