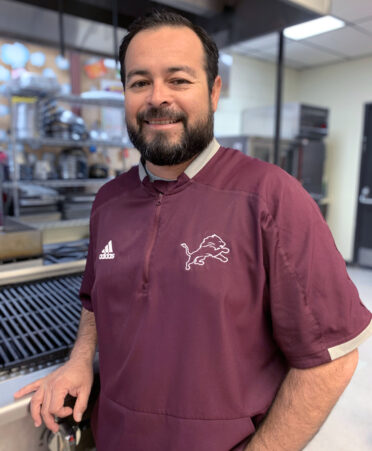 When a job opportunity to teach Culinary Arts arose at La Feria High School, he applied for it. He is now in his fifth year of teaching.

He recalled thinking in his first year there, “It’s time to get down to business because we are going to cook many dishes.”

“I was ready to focus on different recipes, styles and cooking methods,” he said

Ramirez realized that many of his students had never cooked a meal on their own. So he turned to fundamentals: chopping, mincing, dicing and following a recipe.

“One lesson was to have them bake cookies in the kitchen,” he said. “I took a step back because I realized many of them had never turned on an oven. I decided to slow it down — break down the recipe and go step by step so they know what to do.”

An important rule that he emphasizes is sanitation safety, especially regarding COVID-19 protocols.

“How many of you sanitize your cell phone?” he routinely asks his students.

Ramirez said SkillsUSA competitions are his students’ favorite events. He said it is amazing to see their transition from the beginning and not knowing anything to advancing to the final round.

“Parents actually thank me for introducing kitchen etiquette and cooking meals to their child,” he said. “I do have one (former) student who is attending the Auguste Escoffier School of Culinary Arts in Austin.”

The yearly median salary in Texas for chefs and head cooks is over $56,000, with more than 7,700 chefs needed by 2028, according to the U.S. Department of Labor’s CareerOneStop website.