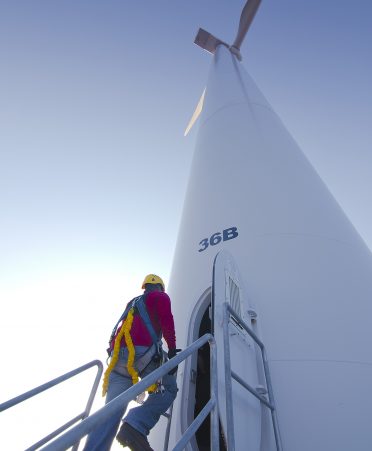 TSTC filling need for wind technicians in Texas, beyond

(SWEETWATER, Texas) – The need for skilled workers who can harness the power of the wind and turn it into clean energy is increasing, and Texas State Technical College is at the forefront of training technicians for the burgeoning industry.

With renewable energy being used nationwide, additional wind energy technicians are being hired — and that trend will only grow.

Jones said when her students in Sweetwater graduate later this year, they will be hired by companies almost immediately. In some cases, students may have jobs in place before graduation.

That happened to 2021 graduate Rebecca Fortuna, who was atop TSTC’s wind turbine in Nolan County when she was interviewed for a job that she later accepted.

Jones said she receives calls daily from companies looking for qualified technicians. She said companies depend on TSTC to produce a skilled workforce.

“They know we provide the best employees because we work with them on a daily basis,” Jones said. “What I am seeing and hearing now is that companies are in need of travel technicians.”

According to the American Clean Power Association, Texas has 33,133 installed megawatts of wind turbines on the electrical grid. The latest American Wind Energy Association market report stated that another 7,619 megawatts are under construction in the state.

Jobs are available throughout the nation. Fortuna’s interview led her to a career in the northeast, and she was not concerned with the travel demands that are part of the job.

“I am not afraid of a challenge. The wind industry is all around us, and it is growing so fast,” she said. “I wanted to be involved in that and wanted to be able to see different things.”

She is not alone in that thinking. James Chung, a current Wind Energy Technology student, said he is looking forward to seeing the world from atop a turbine.

“I am looking forward to the day we climb. It will give me the chance to see all of the scenery God has created,” he said.

Grant Cusenbary said after researching his options, TSTC had one advantage over other programs.

“Almost all of the graduates are guaranteed to be working when they finish. That means the program has a great reputation, and I wanted to be part of that tradition,” he said.

TSTC offers Wind Energy Technology at the Harlingen and Sweetwater campuses. Registration for the fall semester is underway. Scholarships are available. For more information, visit tstc.edu.