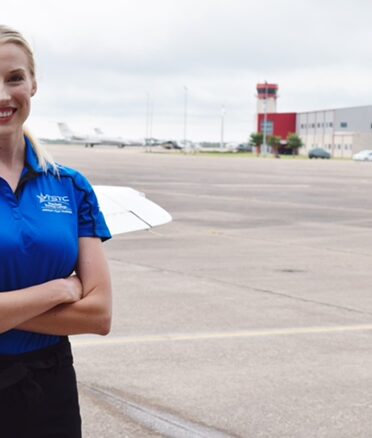 (WACO, Texas) – Natalie Verhoog grew up in California but eventually found her way to Waco. She is a certified flight instructor in Texas State Technical College’s Aircraft Pilot Training Technology program and has 1,500 accumulated flight hours.

Verhoog graduated in 2019 with an Associate of Applied Science degree in Aircraft Pilot Training – Airplane Specialization from TSTC, and this month she received a Bachelor of Science degree in Aviation Science – Professional Pilot from Texas A&M University – Central Texas.

Verhoog’s journey in aviation follows in the footsteps of many others who have gone to work in the aeronautics industry. Thursday is National Aviation Day, which was declared in 1939 by President Franklin Delano Roosevelt to honor the birthday of aviation legend Orville Wright.

How did you become interested in aviation? I did a discovery flight in California and fell absolutely in love with flying. I was a pre-med student at Baylor University at the time. The flight lasted less than an hour. There were dual sets of flight controls in the cockpit, and I got to steer the airplane and turn left and right.

What do you like most about flying? The best part about flying is seeing students grow and learn and complete flight ratings. It is fulfilling to get students in an airplane, and within 15 to 20 hours or more, they are flying solo. Safety always comes first. We do safety checks on airplanes before and after every flight. It’s a great sense of freedom and responsibility, and it is a lot of fun. It is more challenging than anything I have ever done before. You have to be on your A game at all times.

What is your typical workday like? TSTC’s 10 flight instructors fly four times a day in blocks. We all see four students a day. We are available if students need to do night flights or what we call “cross country” flights to airports in Texas or neighboring states. Students give us their availability sheets showing when they are able to fly. The flight instructors are in charge of scheduling students. The goal is to get students flying three to four times a week. On bad-weather days, the students can do ground school and use flight simulators.

What advice would you give to people interested in pursuing the aircraft pilot field? I would tell them to take charge of their flight training. Be as self-motivated as possible. Have a goal to get a rating a semester and be prepared. Those are the students that have the most fun and complete the program in the shortest amount of time.

Commercial pilots earn a yearly median salary of more than $94,000, according to the U.S. Department of Labor’s CareerOneStop website. By 2028, Texas will need more than 5,800 pilots, which leads the nation.

Registration continues for the fall semester. For more information, go to tstc.edu.