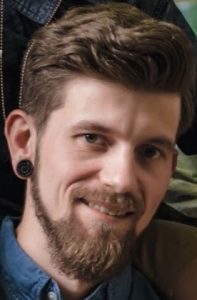 TSTC graduate excited about his future in machining

(HUTTO, Texas) – Travis Miller, of Georgetown, is happy to start the next stage in his professional life.

“I could not be more excited to be learning and growing in the field,” he said.

Miller is a hands-on learner who said he enjoyed going to classes, even with the Precision Machining Technology program’s change to hybrid learning in the spring due to the COVID-19 pandemic.

“I don’t remember how many times I had to reach out to (the program’s instructors) for a question,” Miller said. “They were always willing to help and be there to answer any question I had. They were definitely a good support system as well.”

Tim Hemesath, an instructor in TSTC’s Precision Machining Technology program, said he admired Miller’s drive and determination to learn all he could about machining.

“The attention to detail Travis displays while machining parts in the lab has set the standard for all to follow,” Hemesath said.

Miller began looking for work in his degree field in the summer. He had five interviews and accepted a job as a machinist at Made in America Manufacturing in Austin, where he began earlier this month. He said the company uses the same Haas Automation Inc. brand machines that TSTC’s Precision Machining Technology program uses.

Miller grew up in Indiana and moved to Maryland when he was 19 to improve his life. Maryland was also where Miller met his future wife. At the time, he was working as an assistant manager at a restaurant.

“We just decided it was time to move out on our own,” Miller said. “We said as a joke at our wedding that we would move to Texas. We thought this might be a good deal, so we came out here to visit on my birthday four years ago, and we found jobs and moved out here.”

Though he was making good money as a restaurant server, he said he needed something more in his life.

“I am the type of person that always wants to learn something,” he said.

Miller considered coding, plumbing and electrical work as potential careers. He started looking into TSTC’s Waco campus before he discovered the East Williamson County campus in Hutto. He said while he was afraid at first of the dramatic change in his life, he grew to enjoy it.

“Machining just kind of stuck out,” Miller said. “I did it a little in high school. I had a metals class where we did a broad spectrum of welding, lathe and mill work. I really enjoyed that class and thought it would be a nice fit.”