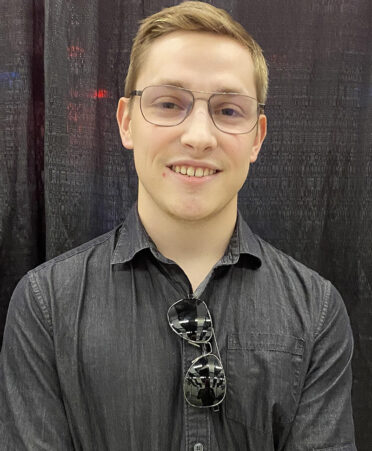 TSTC graduate knew he would have career in wind energy

(SWEETWATER, Texas) – When Josh Leath’s family moved from Alaska to Texas, Leath knew that a career in wind energy would be in his future.

After seeing his father working in the wind industry, Leath enrolled in Texas State Technical College’s Wind Energy Technology program to learn more. He graduated last month with an Associate of Applied Science degree and is now working for Deutsche Windtechnik in Austin.

“Once I graduated high school, I began studying to become an engineer,” he said. “I quickly realized that is not what I wanted to do with my life. My dad was looking for a job in the wind industry, and I wanted to follow his lead.”

Leath said he is excited to begin his new job, but he knows that his first climb will have to wait a few more weeks. He recently had surgery, which has led him to working at a desk to begin his new career.

“I was excited when I heard about the job,” he said. “The company is working with me as I recover, so I will be doing a lot of computer work to start out.”

Leath said his education will help him during his desk duty.

“Our first semester together, the classes were all online,” he said. “I am used to working on the computer, so this will not be a hard transition.”

When Leath and his classmates hit the lab and wind turbine, he noticed a change in everyone, including the instructors.

“It was a lot easier to relate to what we had to do when we were together,” he said. “The instructors are all great. They wanted us to work hard to be successful, and we did that. They really care about you as a person.”

“He would be there with us when we worked on the equipment,” he said. “But he would tell us to leave and take it apart so we could make the needed repairs on our own. That was one of the best ways for all of us to learn.”

“Josh is one of those students who will succeed in this industry,” Blake said. “He has the determination to do his best.”

One of the highlights of the program for all the students is the first climb in TSTC’s wind turbine. Leath’s first climb was filled with excitement and nervousness.

“It was one experience I will not forget,” he said. “We were well prepared for the challenge, and that is thanks to all of our instructors.”

Leath said more people should look at a career in wind energy and learning from the TSTC instructors. He did make one suggestion for incoming students.

“You need to know beforehand how insane this program is,” he said. “It is a career that offers you so many options and career paths. I am proud I was able to be part of the program and carry on the tradition of being hired in the field.”

The job outlook for the wind energy industry is bright. According to onetonline.org, the need for wind turbine service technicians in Texas will increase 83% over the next decade. The average annual salary for a technician in Texas is $51,560, according to the website.