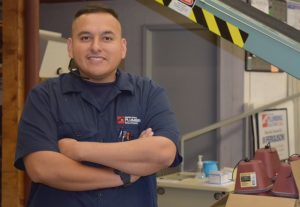 (WACO, Texas) – Jude Gonzales has learned that the positive people with whom he surrounds himself both personally and professionally can be motivational in creating a career and life to be proud of.

Where plumbing is concerned, Jude Gonzales knows that there is always more to learn — and he is not afraid to try.

“You will never truly master plumbing,” he said. “It is extremely complex when you dive into plumbing. It is a day-to-day grind while accumulating wisdom and knowledge and remaining humble at all times.”

Gonzales graduated in 2019 from Texas State Technical College’s Waco campus with a Plumbing and Pipefitting Technology certificate. While at TSTC, he competed in the SkillsUSA National Leadership and Skills Conference in Louisville, Kentucky.

After graduation, Gonzales and his father made plans to move to Idaho. But while eating at a diner on the way there, they decided to go to Albuquerque, New Mexico, because a relative lives in the state.

Gonzales said he had a challenging time finding a job.

“I had an amazing certificate, a resume, people who were well-versed and thought very highly of me, but nobody hired me,” he said.

Gonzales tried a new tactic involving an Albuquerque mall, a business suit, a sign indicating he was ready to work, and a stack of resumes. He eventually met someone who gave him a business card for a plumbing company in Albuquerque.

He worked for that company for two years and accumulated hundreds of apprenticeship hours to take New Mexico’s test to become a journeyman plumber. He received the certification in 2020, according to state of New Mexico licensing information.

“There are long hours, you are constantly having to train, and you are green,” Gonzales said. “Once you overcome those challenges, it is extremely beneficial. It is its own reward in going out to do something very few human beings are wanting and willing to do.”

It was Gonzales’ bout with COVID-19 while in Albuquerque that made him realize he wanted to be closer to his family in the Waco area. Once he made a full recovery, he moved back to Texas. He is now working at Central Texas Plumbing Solutions in Waco and is preparing to take the test to become a journeyman plumber in Texas.

Gonzales grew up in Robison. After graduating from Robinson High School, he joined the U.S. Navy and worked in culinary arts before receiving an honorable discharge. He later enrolled at TSTC and chose Plumbing and Pipefitting Technology because he was curious about the work.

“Jude is very punctual, respectful and focused at whatever he chooses to do,” said Jimmy Bibb, an instructor in TSTC’s Plumbing and Pipefitting Technology program. “He entered this program with the intent of pulling everything out of it that he could. He was a star in the classroom and in the lab. Jude was always digging deeper and asking the hard questions.”

Registration continues for the summer and fall semesters at TSTC. For more information, go to tstc.edu.