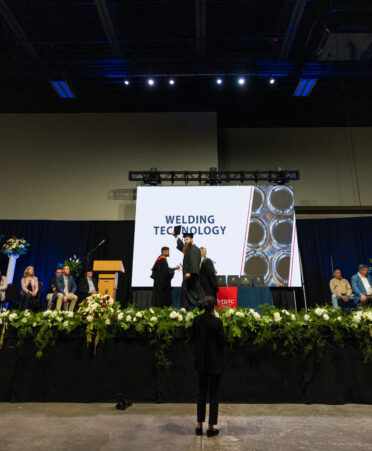 Jerome Mendias, associate provost of TSTC’s Waco campus, said it is rewarding to witness the impact that TSTC has made on the lives of its graduates.

Francisco Rafael Larrazolo, an online mathematics instructor at TSTC, assisted in announcing graduates’ names at the ceremony. He prepared for his role by reviewing the name cards that each graduate was given to pass to the announcers before walking on stage.

“I think the most disrespectful thing you can do is mispronounce their names at graduation,” he said.

John Brady, of Mexia, received an Associate of Applied Science degree in Instrumentation Technology. He will soon start as an instrumentation apprentice at NRG Energy’s Limestone Electric Generating Station in Jewett.

“I’m excited to start a new career,” he said.

Brady said he enjoyed learning how to use the program’s technology in helping better understand how to work in the field. He said the students he graduated with were great to be around.

“I always liked watching cooking shows,” Burks said. “I cook a lot at home, so I decided to try it and see how far I could go.”

She said relatives and friends were watching her walk across the stage. She said food would be involved in her graduation celebration.

Jose Tavares-Salazar, of Waco, graduated with an Associate of Applied Science degree in Culinary Arts. He is working as an assistant manager and kitchen manager at Brown House Cafe in Woodway.

“It (culinary arts) is in my family,” he said. “We have been doing it for generations.”

Tavares-Salazar said he would miss how the program’s instructors made students feel in classes.