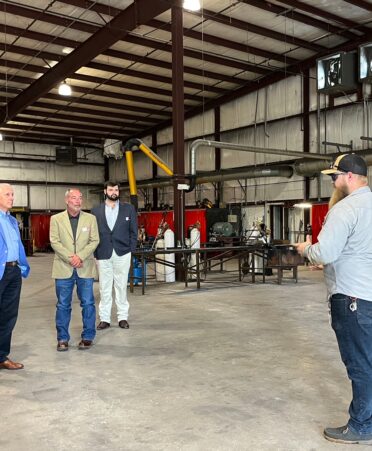 VanDeaver’s visit was his first to the Marshall campus.

“It is very impressive,” he said. “They (TSTC) are obviously preparing people for success in life, and that is what we like.”

While visiting the Automation and Controls Technology program, VanDeaver touched a thermocouple, a temperature sensor, which measured his body temperature and triggered control outputs.

Troy Powledge, an instructor in the Automation and Controls Technology program, said he was glad to tell the state representative about the program’s integration of automatics and robotics.

“Any kind of recognition for us is good,” Powledge said. “So much manufacturing is moving to Texas. They are bringing with them production. Texas will need our (graduates) really badly, along with the rest of the country.”

Russell Hutcherson, lead instructor in the Welding Technology program, told VanDeaver how the program teaches students in both daytime and evening classes and about their job prospects upon graduation.

“Talking about our program to people who can make a real change is great,” Hutcherson said.

“It was a pleasure to host Rep. VanDeaver during his first visit to the Marshall campus,” Day said. “We look forward to seeing him again in the near future.”

Andrew Parks, TSTC’s director of government relations, was glad that VanDeaver made time to visit the campus.

“Rep. VanDeaver serves on the subcommittee of House Appropriations that determines funding for higher education in Texas, where he’s learned about our unique, outcomes-driven funding formula,” Parks said. “He’s taken a strong interest in the results that formula has produced: programs that funnel our students into high-paying, high demand jobs, a quantifiable return on investment for Texas taxpayers, and increased economic development potential both here in East Texas and across the state.”

VanDeaver is a member of the Article III Subcommittee of the House Appropriations Committee and the House Public Education Committee.