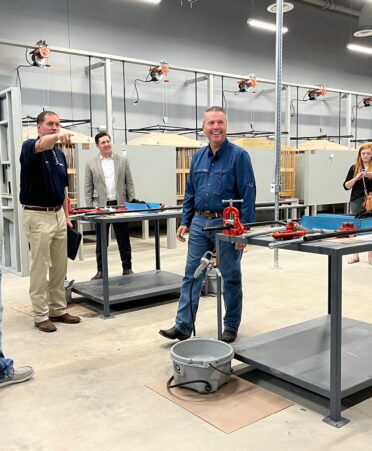 Buckley, led by TSTC administrators and staff, visited the on-campus Texas State Board of Plumbing Examiners testing facility, along with the Aircraft Pilot Training Technology, Aviation Maintenance, Diesel Equipment Technology, Precision Machining Technology and Welding Technology programs. His visit marked the first time that he had been to the campus.

“He showed sincere appreciation in what TSTC is doing for the workforce,” said Carl Wilmeth, co-lead instructor in TSTC’s Welding Technology program.

Buckley said TSTC’s programs are meeting the moment in the state’s economy.

“TSTC is providing technical education that is going to provide high-paying jobs for Texans across our great state,” he said. “From local communities to our state’s economy, TSTC is getting the job done preparing the next generation of Texans.”

The state plumbing testing site is the second of its kind in the state, with the other location being in Austin. The center’s purpose is to give prospective plumbers in the state another convenient location to take written and practical exams. The ribbon-cutting for the Waco testing center occurred earlier this year. Eight people tested at the site last week, with at least 10 more people scheduled to test this week.

Buckley said the plumbing testing center is a model for other technical trades.

In the Aircraft Pilot Training Technology program, Buckley experienced what it is like for a pilot by “flying” in a Redbird Flight Simulations 3-axis motion simulator. In the simulator, he flew over Waco and even attempted to land on an aircraft carrier.

Buckley also learned about TSTCYou, which meets students where they are through a flexible, performance-based education that works with busy schedules. In the performance-based education model, students work with an enrollment coach to develop a schedule in two-hour time blocks. Lectures, videos and other learning content is on Canvas, a learning management system. Instructors also do mini-lectures during the day, with tests being demonstration-based, online or written.