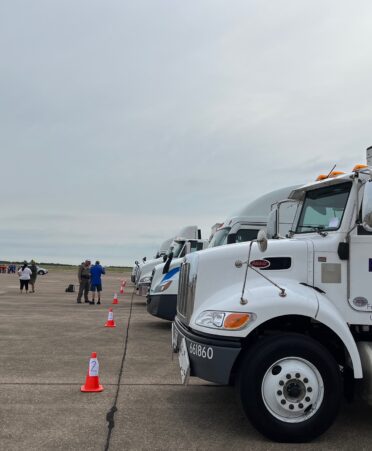 Twenty-four technicians from throughout Texas competed at the Waco campus’ Diesel Equipment Technology building, and 70 drivers competed in the driving contest at the TSTC Airport.

The event is a way for the association to showcase talent in the trucking industry and educate industry representatives about what TSTC has to offer in equipment, facilities and students, said Lance Shillingburg, the Texas Trucking Association’s senior vice president for safety and education.

Companies donated equipment and loaned heavy trucks for use in the driving contest. Some of TSTC’s equipment, along with borrowed equipment, was used in the technician contest.

The technicians who traveled to Waco for the contest had placed in the top 24 among high scorers statewide after having taken an online test. The work they did Saturday was the hands-on portion of the contest.

Chris Gerrald, a diesel mechanic at TravelCenters of America in Weatherford, competed for the first time in the technician event. He said his knowledge and work experience got him through the contest.

“I just wanted to see how I would do,” he said.

Three TSTC students who are members of the Diesel Equipment Technology program’s Diesel Club watched the technician contest and took part as noncompetitors later in the day.

Dylan Duhon, of Waco, a Diesel Equipment Technology student, said the contest was a way to see what he and his classmates could improve on in their learning.

“We are getting to see what we will encounter in the work field,” he said.

Drivers arrived in Waco having placed high at regional contests earlier this year in Dallas-Fort Worth, Houston and San Antonio.

Two courses were set up on the airport’s tarmac near the Col. James T. Connally Aerospace Center. Drivers performed a series of maneuvers, including front stops, bypassing road debris, and truck scale stops.

Benjamin Pena, a driver for H-E-B in Weslaco, has competed periodically since the mid-1990s. One of the most challenging parts of the driving course Pena encountered was making a right turn without the truck’s wheels touching a tennis ball taped to the tarmac.

Pena said he and co-workers create their own driving scenarios at work.

“It takes a lot of hours of preparation, running the course over and over again,” he said.

Luis Tarin, an operations manager at FedEx Ground in El Paso, competed for the second time in the driving contest.

“It’s definitely a good opportunity,” he said. “I see it as a recognition for your hard work.”

Tarin said he enjoys being in the trucking industry because the work that is done keeps America functioning.

“At the end of the day, you feel good about what you do,” he said.

Top drivers will move on to represent Texas at the American Trucking Associations’ National Truck Driving Championships in August in Indianapolis, Indiana. The top technician will take a written test to qualify for the national Technology & Maintenance Council’s SuperTech 2022 competition in late September in Cleveland, Ohio.

For more information on the Texas Trucking Association, go to texastrucking.com.