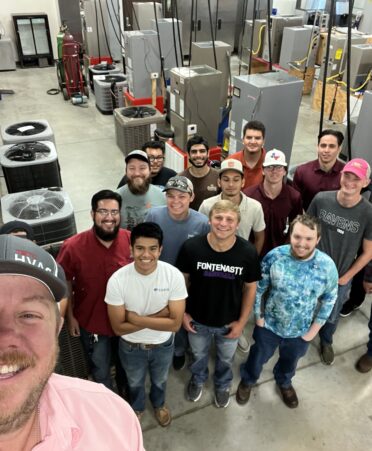 In 2008, back when Warnasch was entering his senior year of high school, the school counselors came to him wondering what his plans were for after he graduated.

“I had already been working in HVAC since I was 16,” Warnasch said. “My cousin had gone to school for HVAC. I told the counselors that I was going into it. They were like, ‘Are you sure? You can go to a four-year college.’ I told them no, that wasn’t for me.”

He found out that TSTC had the dual enrollment program. He decided to move forward with it and met with Keith Klix, lead instructor for the HVAC program at the Fort Bend County campus. At the beginning of his senior year, Warnasch began the program.

For him, it was the right move. Four-year colleges and universities did not appeal to him. Being able to quickly gain a certification and later an associate degree and enter the workforce was a driving factor in his decision to attend TSTC.

Warnasch’s school life consisted of doing dual enrollment classes in the morning, a few high school classes in the afternoon and work for the rest of the day. This schedule allowed him to receive his HVAC Technician certificate of completion the summer after graduating from high school in 2009.

This opened doors for him to find full-time, high-paying job opportunities as he continued attending TSTC for his associate degree. In 2017, after obtaining his degree and working for years in the HVAC field, he was approached by Klix regarding a teaching position at TSTC, where he has been since.

Dual enrollment allows students to get a head start on their college education. College courses are available at some high school campuses, on-site at a TSTC campus, and through distance learning classes taught by TSTC instructors.

According to onetonline.org, heating, air conditioning and refrigeration mechanics and installers in Texas can earn a median salary of $47,980 a year. The website projected that there would be a 21% increase in the number of such jobs in the state from 2020 to 2030.