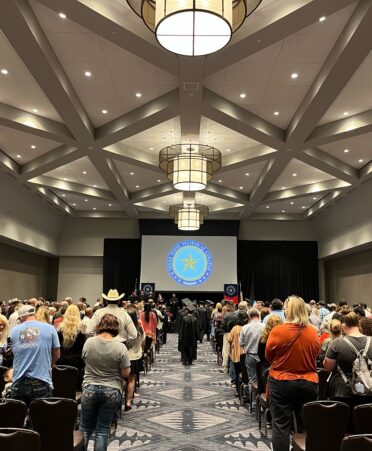 “This is really a big milestone for us,” Adams said. “Not only have we outgrown our space, but the excitement and energy are palatable.”

“The opportunities that await you are endless,” Kerwood said.

Several graduates already have jobs, while others are making plans for the future.

Caroline King, of Round Rock, earned an Associate of Applied Science degree in Culinary Arts last spring but chose to walk across the stage on Friday.

“It’s a milestone in my life to graduate,” she said.

King is a sous-chef-in-training at Marriott Austin North.

“It’s a lot of hard work and long hours, but it is totally rewarding,” she said. “I say food makes the world go around. It brings everybody together.”

Peter Wilson, of Georgetown, received an Associate of Applied Science degree in Industrial Systems – Mechanical Specialization. His internship at ICU Medical in Austin has turned into a full-time maintenance position that he will begin Monday.

“In the maintenance world, you will never be without a job,” Wilson said. “It comes in handy at home too.”

Cooper said TSTC has been a good place for him to learn in-depth and take part in hands-on training. He said he would miss his Industrial Systems instructors and their quality teaching.

TSTC has also helped him find his career path.

“I am just excited about options, as far as jobs go,” Cooper said.