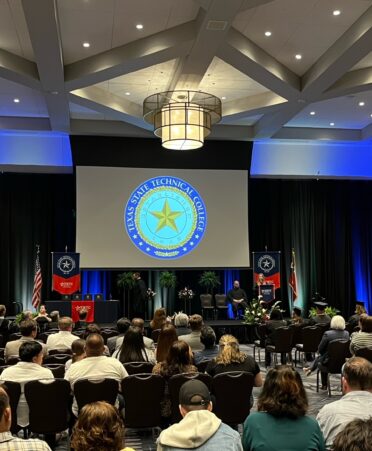 Before the ceremony began, Lissa Adams, provost of TSTC’s East Williamson County campus, said she was proud of the graduates.

“They have persevered and overcome the challenges and obstacles,” she said.

Special guests at the ceremony included representatives of area industries and the Hutto Independent School District, along with TSTC Board of Regents member Tony Abad and local government leaders.

Tim Hemesath, an instructor in TSTC’s Precision Machining Technology program, said he enjoys seeing the excitement in the students’ eyes.

Mikayla Larremore, of Granger, graduated with an Associate of Applied Science degree in Welding Technology. She also received the Provost’s Outstanding Achievement Award.

“It went by really fast,” Larremore said about her time at TSTC. “I’m glad I have gotten all this new experience. It’s a lasting skill.”

Larremore, who is working in retail management for the time being, wants to start her own welding and woodworking business soon.

Mario Parra, of Temple, graduated with an Associate of Applied Science degree in Welding Technology. He said he went to TSTC to continue welding at his place of employment, Tejas SteelWorks Inc. in Bartlett.

“It feels good knowing that more opportunities are now open to me, whether it is in welding or robotics,” he said.

Parra said he will take his degree to work to show his co-workers.

Some graduates are still finalizing their career plans.

This was the second graduation ceremony that he had ever attended, the first being when he graduated from kindergarten. Bruckner said the small charter school that he attended in Leander did not have a middle school graduation, and by the time he became a senior in high school, he converted to home school and also took dual enrollment classes.

Bruckner said he chose TSTC because of its proximity to his home and affordability.

“I just wanted to do something with my hands to make stuff,” he said.

Registration for the summer and fall semesters is underway. For more information, go to tstc.edu.