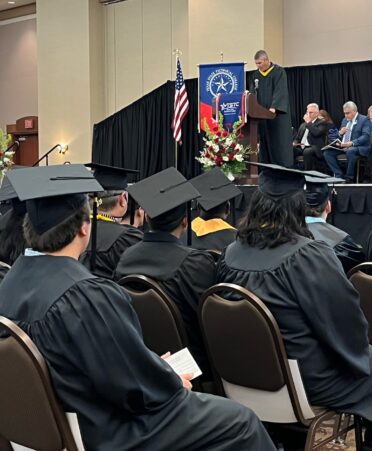 “It feels like forever,” he said. “A lot of the students we had not seen a lot of in the face with their masks on.”

Jerold Nichols, president of Amber Electric Contractors Inc. and a board member of The TSTC Foundation, told graduates to foster their character and commitment in their lives. He also said never stop learning.

Leon Sheares, of Waxahachie, earned an Associate of Applied Science degree in Industrial Systems – Electrical Specialization in the spring but wanted to walk across the stage for his family.

“It was a personal achievement I needed to have,” he said. “I think this is a milestone.”

Sheares had another challenge during his studies: He suffered a stroke.

“I finished,” he said. “I still completed my task. I went through so much to get here.”

Sheares has worked for 11 years at PepsiCo Gatorade in Dallas, with two of those years in the maintenance department. He said his company’s maintenance apprenticeship program enabled him to go to TSTC to earn his degree.

“It was a blessing,” he said. “I enjoyed my classmates. We had fun. We were a unit.”

Sheares said he would celebrate with his family, but had to be at work at 7 a.m. on Friday for the start of his shift.

Wyatt LaFleur, of Mesquite, finished his last class on Thursday morning. He received an Associate of Applied Science degree in Industrial Systems – Electrical Specialization that night.

“TSTC gave me a future,” he said. “Industrial Systems is fun, and every day is different. I like puzzles, and broken machines are puzzles.”

LaFleur has been working since earlier this fall as a maintenance technician at Cardinal Glass Industries in Waxahachie. Now that he has graduated, his work will go full time.

“There is no stress or nervousness,” LaFleur said. “This is just a smooth transition.”

LaFleur said he and his family would celebrate his achievement at Chili’s.

“I will miss the shop we have at TSTC and being able to use the equipment,” he said.

Teran said his degree is special because it shows his 14-year-old son that you can pursue what you want to do. Teran also said he wants to be a role model for his son.

Teran works at JTEKT Automotive Texas in Ennis and has plans to earn a bachelor’s degree in engineering in the future.

“I’m excited to take the next step,” he said.