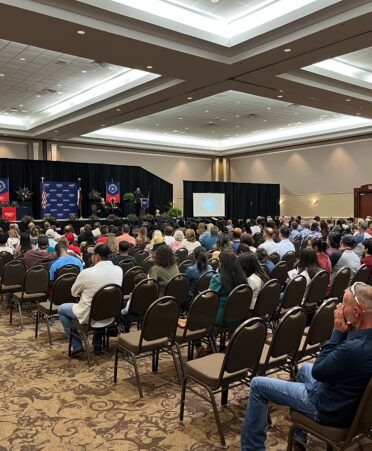 Before the ceremony began, Marcus Balch, provost of TSTC’s North Texas campus, commended the graduates for their perseverance in completing their education.

“It will be cool to see everyone’s faces,” he said. “They really worked hard with a lot of outside forces and factors.”

Jacob Usery, an instructor in TSTC’s Computer Networking and Systems Administration program, said the graduates stayed focused on improving their lives and getting good-paying jobs.

Oscar Gonzalez, of Red Oak, received a certificate of completion in HVAC Technician. He also graduated with TSTC Board of Regents honors and received the Provost’s Outstanding Achievement Award.

He said taking classes in the program’s performance-based education model enabled him to live at home, work part time and study.

“I just want to be skillful with my hands,” Gonzalez said.

Gonzalez will leave later this week for Georgia to start three months of industrial refrigeration training with Alta Heating and Air Conditioning, with plans to return to Texas to work.

Staci Kirkland, of Fort Worth, graduated with a certificate of completion in Structural and Pipe Welding. She said her father-in-law, a nuclear inspector, encouraged her to pursue welding after she had spent six years in the U.S. Army.

“I will miss the instructors (at TSTC) and the advice they give,” Kirkland said. “The environment was really good too.”

Kirkland has been working at Bluff Manufacturing in Fort Worth, using her welding skills to create ramps.

Anderson has worked for more than 20 years at Gerdau Midlothian Steel Mill and had hoped for a better job there.

“I wanted to be in maintenance,” he said.

Registration for TSTC’s summer and fall semesters is underway. For more information, go to tstc.edu.