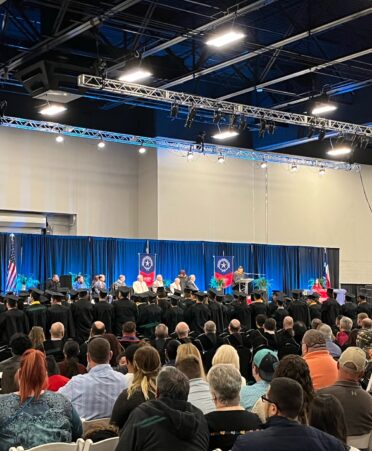 “Today we are celebrating the living testimony of everything that is great about TSTC and its 56-year-old mission,” he said.

Dillon Meek, mayor of Waco, was the keynote speaker. He said that Texas is dependent on TSTC graduates to fill critical jobs. He called on graduates to become leaders in their communities, churches or neighborhoods.

“A TSTC degree means your family will have access to financial security,” Meek said.

Several graduates already have jobs, while others are making plans for the future.

“I enjoyed the hands-on work,” he said.

Hernandez worked during college at a used-car dealership doing detailing and maintenance work. But later this month, he will begin a new career as a technician at Allen Samuels Chevrolet Buick GMC in Hearne.

“The whole thing has been positive regarding the program,” he said. “It’s challenging, but fun.”

After the ceremony, Burns said he and his relatives planned to go out to eat to celebrate.

Burns’ plans for the future are to work as a certified flight instructor and later fly professionally.

“I am excited and looking forward to the future,” he said.

Elizabeth Stiles, of Garland, received an Associate of Applied Science degree in Computer Programming Technology. She graduated with Phi Theta Kappa and TSTC Board of Regents honors.

“I’m happy I got everything done and it went well,” she said.

Stiles started the program taking in-person classes, but as TSTC adapted to the COVID-19 pandemic, her program was moved online. She enjoyed taking online classes since she could focus better and do lessons without waking up early.

Stiles is doing interviews now for remote work and wants to live in Canada someday.