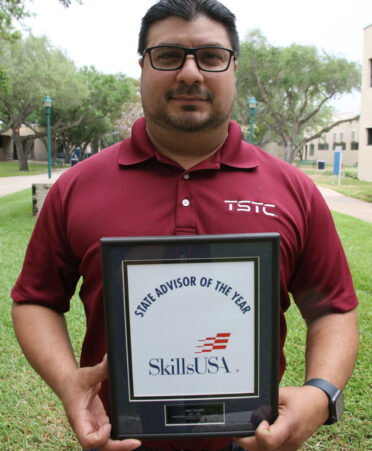 “I was surprised when I heard my name called,” he said. “I am appreciative of the award. We, as instructors, teach the students our knowledge and hope they grasp and elevate their potential to a higher level.”

The teaching provided by Gonzalez, who is a TSTC alumnus, and the other TSTC SkillsUSA advisors led TSTC students across the state to earn 47 medals, including 18 gold, 15 silver and 14 bronze.

“(Isaac) Gonzalez continues to grow the membership at TSTC’s Harlingen campus through his students and working with his administrators,” she said. “As a statewide coordinator, he has taken that passion and growth to all of the TSTC campuses. Every year he has motivated students for leadership roles as state officers and encouraged them to step up in their programs through SkillsUSA opportunities. He is preparing the current and future workforce of Texas through the vision of SkillsUSA.”

TSTC alumna Esmeralda Gonzalez presented the award to Isaac Gonzalez at the SkillsUSA opening ceremony. She was a judge at the state competition and previously a SkillsUSA Texas College/Postsecondary president.

“I have seen him dedicate his time and effort to SkillsUSA and his students,” she said. “He always goes the extra mile for his students. I was excited to announce ‘Advisor of the Year’ to the person I believed could represent Texas Postsecondary at the national level.”

Jesse Carrizales, a TSTC Precision Machining Technology student, was a SkillsUSA participant at the state competition who earned a bronze medal in CNC (computer numerical control) turning. He said Gonzalez helped him find tuition assistance and connected him with potential employers.

“I am proud of his achievement,” Carrizales said. “I felt that he was recognized for doing his job above and beyond his scope of duties.”

Gonzalez earned an Associate of Applied Science degree in Tool and Die Mold Making from TSTC in 1999.