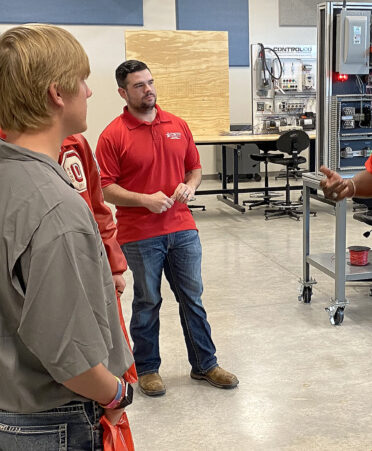 (ABILENE, Texas) – With structural growth continuing in West Texas, the need for electrical and electronic engineering technologists in the region is increasing.

Texas State Technical College Electrical Power and Controls instructors Cody Davis and Kevin Staton have seen a trend over the past two years.

“The level of students we put out is tremendous,” Staton said. “We are seeing that we do not have the number of students needed to fill the demand in Abilene and West Texas. Technicians are needed across the state.”

Davis said with companies like Amazon, Georgia-Pacific and Great Lakes Cheese Co. building facilities in the region, TSTC graduates are in high demand.

“I say 60% of the industries at our recent job fair said they would hire everyone we have,” Davis said.

Staton said some students are being hired before they graduate from the program.

“We have students committed to jobs early and continue to study. They are working and going to school at the same time,” he said. “That is how high the demand is in this region.”

Current students and graduates have been the best promoters of the program, which allows students to receive hands-on training in AC and DC circuits, motor controls, and computer software packages for engineering, designing and drafting.

Staton said Abilene’s location is another factor in the need for technicians.

“Abilene is the central hub of business in Texas. We are at the center of Interstate 20,” he said. “We are getting a lot of attention from industry officials because of our location. That means when construction begins, electrical technicians are needed.”

Many students credit TSTC’s commitment to meeting industry standards for making them successful.

“When I saw what was available on campus, I knew I was right where I needed to be,” said current student Larry Walders. “Having this equipment to train on makes a huge difference.”

Shawn Spear said he has seen himself grow in the program.

“I did not have a lot of electrical experience when I started,” he said. “I would never have been able to wire up a wall outlet before starting this program. Now I can go out and confidently wire an electric box.”

While electrical and electronic engineering technologists and technicians can make an average salary of $63,260 in Texas, according to onetonline.org, the median salary in West Texas is $75,710. The projected growth for such positions in the state is 8% by 2028, according to the website.

Electrical Power and Controls is part of TSTC’s Money-Back Guarantee. If participating students do not find a job in their career field within six months of graduation, they will receive a refund of their tuition.