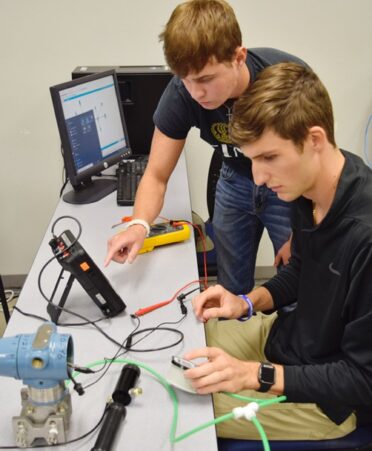 “You need hands-on work to be a good technician,” said Mickle Peine, an instructor in TSTC’s Instrumentation Technology program.

The program has added new equipment to its labs, including eight Emerson AMS Trex Device Communicators. These can talk to smart Highway Addressable Remote Transducers, or HARTs.

William Smith, of Teague, an Instrumentation Technology and Electrical Power and Controls student, said the communicator is user-friendly.

Smith is confident he will be at an advantage by knowing how to use the program’s digital equipment upon graduation.

Smith was encouraged by his father to study Instrumentation Technology, which eventually led him to add Electrical Power and Controls as a second major.

“I can be versatile in both fields,” Smith said.

“They (the students) have to learn how to troubleshoot and communicate accurately what they see,” Peine said.

Luis Aguilar, an Instrumentation Technology student from Amarillo, chose his program of study because of the pay potential. He said he has enjoyed using transmitters and transducers in hands-on labs.

“The faculty are knowledgeable,” Aguilar said. “If we have a question, they answer it. Some of us are made to look answers up.”

Aguilar is working as a maintenance technician at Coca-Cola in Hewitt, but after graduating in August from TSTC, he will move into a new position in the company’s controls department.

TSTC offers an Associate of Applied Science degree in Instrumentation Technology. The program is part of TSTC’s Money-Back Guarantee, which enables students who do not find a job in their profession within six months of graduation to have their tuition refunded.

Registration continues for the fall semester, with scholarships available. For more information, go to tstc.edu.