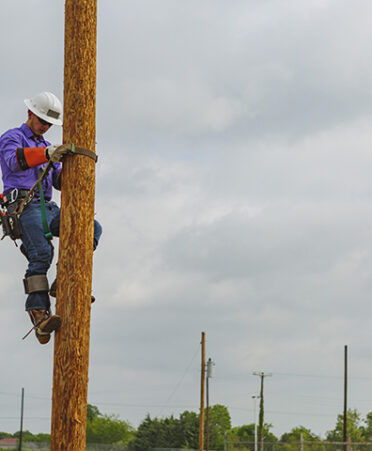 (ROSENBERG, Texas) – What does it take to be a successful Electrical Lineworker Technology student at Texas State Technical College?

According to TSTC lineworker instructor Troy Eads, a lot of common sense, drive, self-assuredness and athleticism, to name a few qualities.

“I tell my students, first of all, this job isn’t for everybody — you have to really want to be a lineworker to do it because it’s hard work,” he said. “They don’t just give that kind of money away. You have to earn it. It’s physical, it’s mental, it’s challenging. It’s rewarding, though.”

Eads compared it to the lifelong bond that police officers often experience throughout their careers.

“There’s only a handful that can take it,” he continued. “You’ve got to be tough.”

The lineworker program is part of TSTC’s money-back guarantee. If participating students do not get a job in their degree field within six months of graduation, TSTC will refund their tuition money. This program reinforces TSTC’s commitment to prepare and place highly trained students in the workforce.

Many of TSTC’s lineworker graduates from the Fort Bend County campus go on to work for CenterPoint Energy, Eads said, adding that CenterPoint applicants with a TSTC lineworker certificate are prime candidates for interviews.

“Our main job here is to get our students jobs,” he said. “If you don’t have a good relationship with the people who hire your students, you’re just wasting your time.”

Eads recalled a time when CenterPoint had 12 to 15 jobs posted online. Those postings received nearly 8,000 applicants. In the end, six TSTC lineworker graduates were hired for those open positions.

“It is a pretty good percentage,” he said.

In Texas, electrical powerline installers and repairers can make an average annual salary of $55,880, according to the U.S. Bureau of Labor Statistics. Onetonline.org projects that these positions will grow 16% by 2028 in Texas.

Salaries in lineworker positions also have the potential for growth. One of Eads’ students from his very first cohort at TSTC called him in January.

“He had just made the hundred-grand-plus club,” Eads said. “He was calling me and thanking me. I was like, man, I didn’t do anything. You did it. I just had to steer you in the right direction because you were a little hard-headed.”