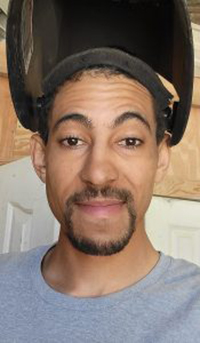 Lance continues to learn after earning associate degree at TSTC

(ABILENE, Texas) – Marcus Lance has done a lot in a short period of time at Texas’ largest limestone quarry.

After earning an associate degree in Industrial Systems at Texas State Technical College in 2020, Lance began working for Champion Stone Co. in Lueders. The maintenance technician has seen his education pay off daily.

“I am the main guy when it comes to all of the electrical boxes at the quarry. I have also installed three or four different plumbing systems while I have been working there,” he said.

Lance has also learned how to use heavy machinery, including a front-end loader.

“I have to do a lot of different things when it comes to work. At school, we learned to operate a forklift, but now I can drive a front-end loader with 20,000 pounds on it,” he said. “I never thought I would be able to say I could operate something that big.”

Having an aptitude for operating mechanical equipment comes naturally to Lance. In his spare time, he makes knives in his backyard shop.

“Do-it-yourself and using equipment is right up my alley,” he said. “I think having more experience will help you in life.”

When Lance started the program at TSTC, he knew he had some experience, but he was surprised by how much he learned.

“I would apply what I did know when I was in class, but I was surprised that almost daily I would learn something I did not know,” he said.

Lance said being raised by a single mother led him to learn how to fix things around the house and eventually apply that knowledge toward a career.

“It was up to me to help her out. If something were wrong with the car, I would dive right in and try to fix it,” he said. “I wanted to get things done around our house that needed to be done. While I was able to do that, I was learning a new skill.”

Lance said one skill he learned at TSTC was welding.

“I was able to learn enough about welding that I bought my own welder,” he said. “I am the kind of person that likes to read instructions and put that knowledge to work. Once I read about it, I want to use it over and over again to make sure I know I am doing it correctly.”

Lance said the program offers people various options, but he does have advice for anyone considering TSTC’s Industrial Systems program.

“It may be overwhelming at times, but remember you do not have to become a master,” he said. “Make sure you are comfortable with what you are doing so you can take the next steps.”

According to onetonline.org, electrical technician jobs are expected to increase 8% by 2028. TSTC instructor Daniel Diaz said people like Lance and other TSTC graduates are able to learn different trades and become highly skilled when they complete the program.

“We offer a lot of different options for our students. They are able to learn different areas of the trade and can find a good job when they graduate,” Diaz said.