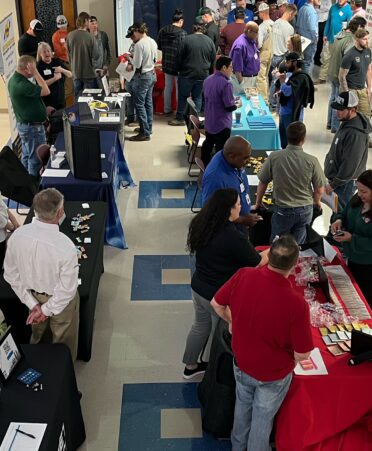 “I am very pleased with the turnout,” said Hannah Luce, director of planning and special events for TSTC’s Career Services department. “It’s more than I could have hoped for.”

More than 100 students talked to company representatives dealing with construction, manufacturing, transportation and other fields tied to TSTC.

Vickie Gonzalez, human resource specialist for West Fraser Wood Products in Henderson, has positions open for an electrician, a forklift operator, a kiln operator trainee, and other jobs. She said the company gets applicants, but the difficulty comes when they do not answer phone calls to advance further in the interview process.

“We are the highest-paying company in Henderson, and it’s hard to find people,” Gonzalez said.

Jackie Haney, director of operations and technical support for Houston-based Waukesha-Pearce Industries, said the company was seeking future graduates to fill jobs for heavy-duty diesel technicians. She said graduates who are prospective employees can receive eight weeks of specialized training at the Oklahoma State University Institute of Technology and then begin to work their way up in the company.

“It is increasingly hard to find young people who want to get hot and dirty,” Haney said.

Dane Hayton, human resources manager at Tenaris, which has its North American headquarters in Houston and multiple locations across the United States, was seeking graduates with electrical, industrial maintenance, machining and welding experience. He said the company typically participates in job fairs that include military and technical colleges. Tenaris has been an industry partner with TSTC for about six years.

“It was nice to be back in front of the students,” Hayton said.

Students were excited to participate in an in-person event again. During the last two years, TSTC held virtual job fairs to minimize social contact due to the pandemic.

Luis Molina, a Welding Technology student from Longview scheduled to graduate in December, said he liked what he learned from representatives of Samsung Austin Semiconductor and the Texas Department of Criminal Justice.

“I really enjoyed it,” he said. “I got a lot of information from them.”

Daniel Stowe, of Gladewater, is a Computer Networking and Systems Administration student scheduled to graduate in December. His goal is to transition from graduation into a career as smoothly as possible.

Stowe said the event was helpful to him because he got to talk to company representatives face to face. Some of his questions dealt with reimbursements for relocation and tuition.

Ryan Foreman, of Gilmer, is a Welding Technology student scheduled to graduate in April. He said welding is a versatile field in which he can take part close to home or farther away in the state.

Foreman’s journey to TSTC was preceded by four years in the U.S. Army and work in the oil and gas industry and trucking.

“They (TSTC) have everything you need to learn,” he said.

Luce said plans are being made to have another in-person Industry Job Fair this fall.