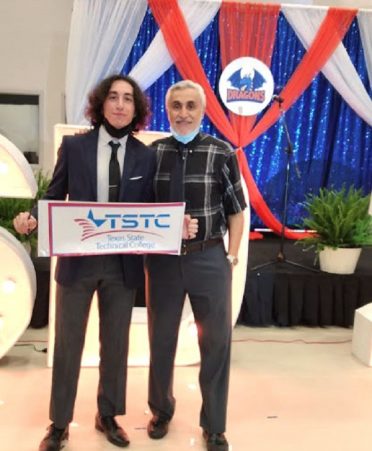 Other TSTC instructors’ children have also studied on campus

(HARLINGEN, Texas) – When Horam Ardalani begins his studies for an Associate of Science degree in Mathematics this fall at TSTC, he will be the third of his siblings to study at the college. He decided to follow the same path of success as his older brothers, enrolling in the college after graduating from IDEA Public Schools.

It will not be his first time on campus. Ardalani remembers spending many hours in his father’s office, entertained by whatever Kyumars Ardalani, an associate math professor, printed out for him.

“It’ll be surreal — me, a student, (in) that building I know inside and out,” Horam Ardalani said.

Having had all three of his children spend time as students on his campus is a point of pride for Kyumars Ardalani, who has taught at TSTC for 31 years.

“That was, in a way from their part, approval of the institute I’m working at,” he said. “I definitely was a proud father.”

Horam Ardalani, 18, will focus on biomedical engineering, the ideal blend of his passions.

“I’m very interested in biology, but I also do enjoy numbers heavily, like my father, with math and engineering,” he said.

Middle brother Shwan Ardalani, 26, pursued business through TSTC and the University of Texas Rio Grande Valley, where he is about to get his master’s degree. Arez Ardalani, 29, the eldest, has worked as an architectural engineer in Dallas for the past seven or eight years.

Kyumars Ardalani recalls his oldest son’s TSTC education positioning him for success when he transferred to Texas A&M University.

“When he got to A&M, well, he was a little intimidated, thinking, Oh, this is a big university — for sure it’s going to be much tougher,” Kyumars Ardalani said. “He really found the courses — although they were higher-end courses junior and senior year — much easier. He thought the instructors were tougher at TSTC and they really gave him a good foundation.”

“It was, for one thing, the most convenient — it’s right here. They were still under our wings for the first two years of college,” he said.

The three Ardalani brothers are not the first children of TSTC instructors to get their education on the same campus where their parents work. In fact, Kyumars Ardalani has taught other instructors’ students in his own math classes.

“TSTC is very affordable, great education, and the courses are solidly transferable to any university — not only in the state of Texas, but the whole country,” he said. “People are finding that out, and they trust TSTC with their kids. If we trust our kids with TSTC, then just imagine the kind of effect it has on the community as a whole.”

Will it be weird for the Ardalanis if father and son cross paths in the classroom? No, according to Horam Ardalani. In fact, he relishes the opportunity.

“He’s the most ideal teacher I’ve ever had — since I was a little kid,” he said.