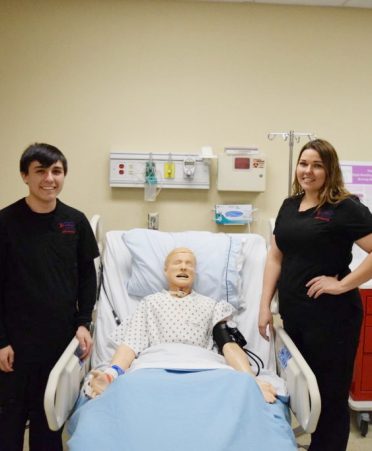 (SWEETWATER, Texas) – Winning is so nice, she did it twice. Now Kacee Merrifield wants it again, and so does one of her classmates.

Merrifield is a nursing student enrolled in the associate degree program at Texas State Technical College in Sweetwater. She has competed at SkillsUSA two years in a row, winning state both times and placing nationally.

“It’s a very validating feeling when you get to test your skills against others in your industry, but it’s so much more than just winning a medal,” Merrifield said.

“I love that SkillsUSA offers a platform to meet other professionals. You meet so many people and make friends and get to travel. I really enjoyed what Skills has done for me,” Merrifield said.

Hoping to win his second first-place title is fellow nursing student Corbin Calsoncin. Calsoncin and Merrifield both graduated from TSTC in Breckenridge with a certificate of completion in Vocational Nursing in 2018. Calsoncin is also currently enrolled in the nursing program at TSTC in Sweetwater.

“I was nervous my first couple times I competed, but I feel better now and am more prepared,” Calsoncin said.

Not only do Merrifield and Calsoncin compete in SkillsUSA at the collegiate level, but they also judge the high school level.

“Judging is a chance for them to give back and share their experiences with others,” Marchelle Taylor, TSTC nursing instructor and West Texas SkillsUSA coordinator, said. “Skills allows them to interact with other students and industry around the state and nation.”

Merrifield and Calsoncin will compete at the SkillsUSA 2019 Leadership and Skills Conference on April 12-14 at TSTC in Waco.

Both students encourage anyone interested in nursing to visit TSTC and take advantage of the opportunities available with SkillsUSA.

For more information on Texas State Technical College, log on to tstc.edu.