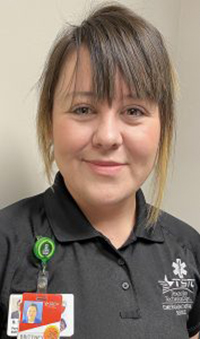 (ABILENE, Texas) – Brittney Sims said she received a second chance at life for a reason.

In 2005, Sims attempted to take her own life as a teenager and at one point was not responsive to paramedics trying to save her. Sixteen years later, Sims is now a student in Texas State Technical College’s Paramedic program and is studying under the paramedic who was the first to arrive at her house that day.

Ronnie Pitts, TSTC’s Emergency Medical Services instructor, was that paramedic. Doctors said Sims would not have normal brain function, but Sims wanted to prove everyone wrong.

“Ronnie Pitts played a key factor in saving my life. Without him, I would not be here today,” Sims said.

She earned her emergency medical technician certificate from TSTC and began the paramedic program for one reason.

“I knew I could do more with my life, and I knew that I wanted to help people the way that Ronnie helped me,” she said.

Pitts said when Sims began the program, he did not remember who she was at first. It was through an email that took Sims some time to write that he learned who this student was and what he meant to her.

“Out of the blue, I received her email, and it hit me,” Pitts said. “Many times as EMTs and paramedics, we wonder what happens to our patients after we drop them off. It is only normal. I am able to see what became of her, and I know she will be a successful paramedic.”

Sims said it took her some time to decide to leave her position in an orthodontics office to attend school, but she is glad she made the choice.

“(Pitts) was thrilled I made the decision to come back to school. I was glad I could show him that the outcome of his call to my house turned out for the best,” she said.

Sims currently works as an EMT at both MetroCare in Abilene and Scurry County EMS in Snyder. She said having experience at both a rural and a larger city service will pay off in the future.

“There are some things I do in Scurry County that I do not do in Abilene. I am impressed that I am learning something new every day,” she said.

“She is very confident in what she does and is a quick learner,” he said. “She is getting her eyes open to what rural EMS is about and what we stand for. She is beginning to understand that it is an entirely different system and one she could be successful in.”

Sims said she wants to help pay it forward by promoting TSTC’s program as often as possible. That included recruiting her best friend to join the program earlier this year.

“I hope we will be able to work on an ambulance together one day. Right now, it is good that we are able to see each other on a daily basis,” Sims said.

Sims is also able to talk to her instructors about the calls she had to answer. She said that makes the program appealing to many students.

“There is such amazing team support with all of the instructors. We know that we will be able to talk to them about things we experience in the field,” she said. “I knew I was saved for a reason. I just needed to search for what it was — and it was to become a paramedic and help people like Ronnie helped me.”

Registration for the fall semester is underway. Scholarships are available. For more information, visit tstc.edu.