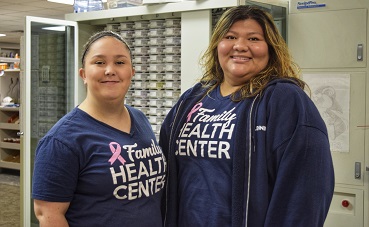 (WACO, Texas) – Before Courtney Balzadua, 27, of Waco became a pharmacy technician at the Family Health Center, she balanced working as a waitress and being the mother of a small child.

She knew she needed to make a career change.

“I wanted to be in the medical field in some way,” said Balzadua, a 2015 graduate of Texas State Technical College’s Pharmacy Technician program.

The need for pharmacy technicians is projected to grow nationally to more than 450,000 jobs by 2026, according to the U.S. Bureau of Labor Statistics. The agency credits the job increase to a rising need for prescription medicines. Pharmacy technicians must learn the general uses of medical drugs but cannot legally counsel patients.

TSTC’s three-semester program includes classes in Drug Classification and Pharmaceutical Mathematics and an on-site clinical at a hospital, pharmacy or other medical facility like the Family Health Center.

Program graduates can work under pharmacy training licenses for two years, Walters said. During this time, the graduates get three chances to take the Pharmacy Technician Certification Board’s licensing test to continue working in the field. The graduates also undergo a background check by the Texas State Board of Pharmacy.

Traci Crain is a staff pharmacist at the Family Health Center’s pharmacy on Providence Drive in Waco. She said she can tell within a month which pharmacy interns can adapt to the job. Some of the qualities she looks for include being able to work with others, handle criticism from customers and exhibit a solid work ethic.

The Family Health Center typically hires two interns each semester. Crain said interns start out sacking prescriptions for customers. She said interacting with the staff enables the students to understand the pharmacy language. Eventually interns can advance to working on registers and helping customers.

“It’s not uncommon to get hired before they graduate,” Walters said.

Jennifer Herrera, 34, of Waco graduated in 2005 from TSTC’s Pharmacy Technician program and has been working at the Family Health Center since she was an intern.

“This is in a low-income area,” she said. “I don’t see myself as different from any of our patients. I fell in love with the environment.”

Herrera often works with clients in both Spanish and English.

“You do have to be careful because certain words can mean different things,” she said.

The Family Health Center has 16 locations in Bell and McLennan counties. There are about 20 employees who work at the pharmacy from Monday to Friday. Overall, the Waco location fills an average of 700 prescriptions per day.