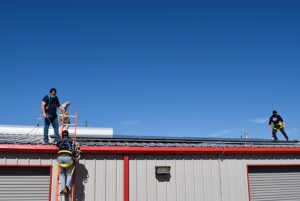 That can also include solar farms.

Invenergy, a worldwide private sustainable energy company, plans to build what it claims will be the largest solar farm in the United States. The 1,310-megawatt Samson Solar Energy Center facility will be located in Northeast Texas and be fully operational in 2023. The facility is projected to produce energy for 300,000 homes, according to company information.

“Right now, solar is booming,” said Hugh Whitted, chair of Texas State Technical College’s Solar Energy and Electrical Construction department. “It has rebounded from the tariffs that were put into place a few years back. We have a lot of systems going in and the people that need the work done.”

The Samson Solar Energy Center project is expected to generate 600 construction jobs and 12 permanent jobs upon completion, according to information from Invenergy.

Jobs for solar photovoltaic installers is projected to grow to more than 18,000 up to 2029, according to the U.S. Bureau of Labor Statistics. The growth is attributed to an increased demand for usage and upkeep, and state and local governments offering incentives.

“I am getting emails usually at least a couple of times a month from solar and electrical contractors all over the place, most of them in and around the Metroplex or Austin to San Antonio,” said Whitted, who is based at TSTC’s Waco campus.

Holtek Fireplace and Solar in Waco began doing local solar work in 1999, said Holt Kelly, the company’s owner. The company does designs and sales, while an electrical contractor performs installations.

“Here in this market, it is spotty,” Kelly said. “We are a small company. I am picking and choosing.”

Kelly said businesses in the Waco area are not yet quite in tune with installing solar panels. But, he said homeowners have been using solar panels for years.

“Solar farms are great, but in my opinion solar is best used most efficiently at the point of use of power, the buildings where the energy is being used,” Kelly said.

Training for solar work means going into a career in the electrical field. TSTC’s students can pursue a “Triple Crown” consisting of an Energy Efficiency Specialist certificate, an Electrical Construction certificate and an Associate of Applied Science degree in Solar Energy Technology.

“It (solar) is not an industry that is going to shrink, realistically,” Whitted said. “People are not going to stop putting in solar unless there is something better out there.”

Whitted said skills in basic mathematics and communication are needed for the solar field. It also helps not to be afraid of heights.

Kelly said people interested in the solar field should strive to become an electrical apprentice and journeyman.

“If you want to do that, you are in the construction business because that is a big part of installing the arrays,” he said. “If you do not want to be the boots on the roof, then learn how to design these things and learn as much engineering as you can.”