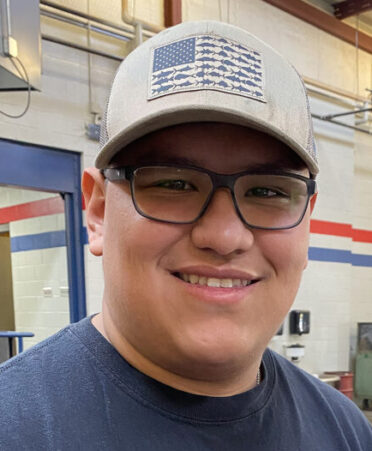 (SWEETWATER, Texas) – Titan Suarez was looking for an exciting career.

Narrowing his choices to welding and diesel mechanics, he recalled the good times he had helping friends work on their diesel engines.

“A few of my friends in Lubbock have diesels, and I always liked to work on them,” he said. “I was either going to be a welder or a diesel tech. I decided that working on diesel engines would be the most exciting opportunity for me.”

Suarez is now in his first semester at Texas State Technical College, where he is pursuing a certificate of completion in Diesel Equipment Technology.

He said attending TSTC has helped him make new friends with a similar interest.

“At first, we did not know each other,” he said. “But once we got in the shop and started talking, a lot of us became friends, and we want to see everyone succeed.”

Suarez said some areas of the first semester have been more difficult than others, including learning how to take apart the engine’s hydraulic system.

“We have been working to figure out how everything works,” he said. “It has taken some time, but we are all starting to understand things more.”

Students have also been able to exchange ideas while working on assignments, Suarez said.

“I have found that we all have to work together,” he said. “Some people may have certain ideas, and others might want to go a different route. We have learned to communicate and make the best decision.”

Suarez said he is learning to approach problems from various angles.

“I like having to learn where and how to fix the root of the problem,” he said. “I know there are many different ways to fix things, and we are going over each of those options.”

Suarez credits instructor Lane White with helping him understand the different systems inside the engine.

“Lane makes things a lot easier to understand,” he said. “He will show us how things are supposed to be done and then put it back together so we can do it.”

White said Suarez is one of the students who learns better with his hands.

“Titan is a true hands-on learner,” he said. “Many of our newer students learn more with their hands, and that is becoming more common.”

Suarez enjoys returning to Lubbock to show his friends what he has learned in college. He said they are impressed with what he has been able to show them.

“My friends did not realize how simple some things were to pick up,” he said. “My dad is also impressed with what I have been learning. He is really proud of what I have done so far.”’

According to onetonline.org, jobs for bus and truck mechanics and diesel engine specialists are expected to increase 14% in Texas by 2028. Diesel technicians employed in Texas can earn an annual average salary of $49,810, the website stated.

Diesel Equipment Technology is offered at the Fort Bend County, Marshall, North Texas, Sweetwater and Waco campuses. It is part of TSTC’s Money-Back Guarantee program. If a participating graduate does not find a job in their field within six months of graduating, TSTC will return their tuition in full.