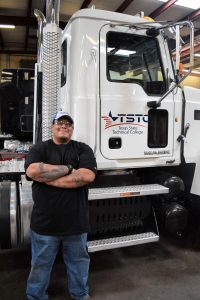 (SWEETWATER, Texas) – How would you define a hero? As a parent? As a soldier? Texas State Technical College student Roy Banda is all of that and more.

Banda, 32, is a former Marine now pursuing an Associate of Applied Science degree in Diesel Equipment Technology at TSTC in Sweetwater while fostering five children at home in Brownwood.

“I was working in a factory, with no way to move up anymore. So I talked to my wife, and now I’m using my GI Bill to create a career,” Banda said.

Banda served four years in the Marine Corps as a rifleman between 2007 and 2011, with deployments to Iraq and Afghanistan.

“My time in the Marines helped me a lot with discipline, obedience and work ethic in everyday actions and now school,” Banda said.

One example of Banda’s self-discipline is his dedication to be early for class each day, despite an almost two-hour commute.

“I drive half the distance Roy does every day, and he still manages to get here before me,” Mark Koslan, master instructor for DET, said. “He is dedicated, he’s a family man, he’s a veteran, and I have a lot of respect for him and his initiative to find a career path.”

Even though Banda attends school full time, he and his wife have a houseful of six kids, five of whom are foster children they plan to adopt.

“We decided to foster just to help out, then fell in love with them,” Banda said.

Banda will compete in Diesel Equipment Technology at the SkillsUSA 2019 Postsecondary Leadership and Skills Conference on April 12-14 at TSTC in Waco.

“I was nervous when I first agreed because I hadn’t really had any mechanical training before TSTC. But, just in the couple semesters I’ve been here I feel much more confident,” Banda said.  “One of the Marine Corps’ mottos is to adapt and overcome, so I’ll use that.”

Banda is expected to graduate in spring 2020 and plans to build a positive reputation so he can open a shop of his own.

For more information on Texas State Technical College, log on to tstc.edu.