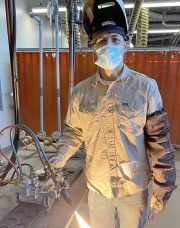 Butler, who completed his first semester in Welding Technology this fall, wants to be a traveling welder. He is studying for an Associate of Applied Science degree in order to achieve his goal.

“I have seen most of Texas and decided I wanted to see the rest of the country,” he said. “I wanted to do that by doing something I liked, which is welding.”

“I was very intrigued by his story and know he will do a good job,” Lewis said.

“I was always interested in welding,” Butler said, adding that he did not pick up a torch much before beginning classes in August. “Once I picked it up, I think I took to it like a duck to water.”

He wanted to pursue an associate degree for one reason.

“Having an associate degree in hand will give me job security,” he said. “It will lead me down a career path as far as employers. I know that will help me when applying for a job.”

Butler said a friend talked to him about taking welding classes at TSTC.

“He graduated from the welding program last year and has given me a lot of advice,” he said. “He is working in the field right now, and I know I can always call him.”

Butler said he is using some of the techniques he learned during his first semester on outside projects.

“I knew the TSTC instructors would be able to help. The program is laid out great for people to learn,” he said.

When it comes to traveling the country to work, Butler said he did not have a preference on what type of work he wants to do.

“Whether it is an oil pipeline, wind turbines or the big buildings in larger cities, I want to be able to see the rest of the country and make this my career,” he said.

His path is just beginning at TSTC, and he knows it was a good choice.

“I know with an education from TSTC I will be set for the rest of my life,” he said. “This will be something that one day I will be able to teach my children and then to their children.”

According to the Bureau of Labor Statistics, welding jobs will increase by nearly 4 percent in the United States by 2028.