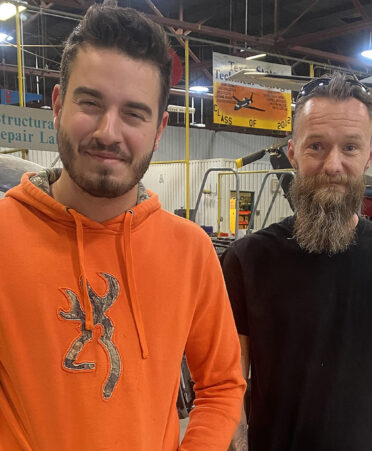 (ABILENE, Texas) – Wanting to learn to work on more than automobiles and diesel engines, Michael Dupre and Jordan Grisham are hoping to soar in the aviation industry.

Dupre and Grisham each are studying for Associate of Applied Science degrees in both Aircraft Airframe Technology and Aircraft Powerplant Technology at Texas State Technical College. Dupre started the program this semester, while Grisham is in his third semester.

Both students said they enjoyed working on engines and wanted to expand their knowledge.

“I have been wrenching my entire life,” Dupre said. “I have worked on cars, diesels, served in the military and then worked on motorcycles. I like using my hands and knew this would be a good opportunity to learn more.”

Grisham works for Ezell Avionics in his hometown of Breckenridge. He helps restore World War II-era planes and wanted to be able to learn more about them.

“I really like challenging things, and this was a great way to help me learn more,” he said. “Aviation has been a family trade, with many of my family members serving in the military.”

Grisham said students new to the program need to remember the most important thing to succeed.

“Study. You will need to study and be prepared,” he said.

Dupre has an advantage in that area because his wife, Racheal, is two semesters ahead of him in the program.

“When I have time, I listen in during her online classes to see what I will be learning later in the program,” he said. “She is always there to help me if I have a problem with one of my courses.”

Both students said working on plane engines is similar to vehicle engines.

“It was easy to see some things are different, but it is all mechanical,” Grisham said.

Dupre said talking with his wife showed him it would be a good career.

“She worked on engines and told me since I have done the same thing, I could succeed in this program,” he said. “I cannot wait to get in there and work on the planes and learn how things work.”

Grisham said his Ezell co-workers are proud of him for attending college.

“I want to work for Ezell full time and make this my career,” he said. “I think it is great to work on refurbishing World War II planes. I am living a dream of restoring our history.”

Dupre is impressed with Grisham’s opportunity.

“It is a cool opportunity to work on those planes. That is something I might have to look into,” he said. “I did not know we had such a place this close.”

Dupre wants to learn all aspects of avionics and may venture into other areas after earning his degree.

“I think I could continue school and learn more aspects of avionics,” he said. “There is so much I can learn and do in this field.”

Grisham said he hopes to be able to do something unique one day.

“To be able to fly a refurbished World War II plane would be a dream come true for me,” he said.

The need for aircraft mechanics in Texas is forecast to grow 8% by 2028, according to onetonline.org. The average salary for a technician in the state is $66,260, the website showed.