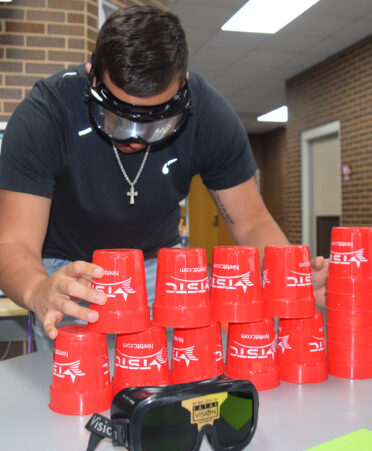 During the students’ lunch break, local law enforcement and Texas Department of Transportation officials talked about the effects of drinking and driving. Students had the opportunity to use alcohol simulation goggles to see how they would respond to a field sobriety test.

“It was an extremely important opportunity to educate our students of the consequences they could face if they drink and drive,” said TSTC Police Sgt. Jonathan Westra. “Having the alcohol simulation goggles was the best way to show students the dangers.”

“For the students, we were more approachable,” Westra said. “They need to know we are here to help them, and not to punish them. But they need to be aware of the punishments if they do make a mistake.”

Thompson emphasized that point by detailing how being arrested for driving while intoxicated will affect a student’s life.

“It is important to plan ahead,” Thompson said. “We know there is drinking, but you have to make sure you are smart and safe.”

The Nolan County Sheriff’s Office display pointed to that fact by showing that alcohol plus driving leads to fines, prison or death.

“This illustration is relatable to students,” Strong said. “It was a practical way to show the students the consequences of their actions.”

Christie provided varying levels of alcohol simulation goggles for students to wear while they performed a field sobriety test.

“We were able to talk to the students about the consequences of underage drinking,” she said. “I like to remind them that the decisions they make right now could affect the rest of their life. It will not only affect them, but their family and friends.”

In addition to the field sobriety test, students had the chance to test the goggles while stacking cups and operating a remote control car.

“It was a real-life experience for me to see what it was like being intoxicated,” said Jose Ortiz, a Wind Energy Technology student. “In this area, there is not a lot for kids to do, but it shows we need to be safe with the decisions we make.”

Ortiz said it was good to see local officials offering tips for students, especially with summer providing many travel opportunities.

“It showed that the local community is invested in our safety,” he said. “Their number one priority is our safety.”

“If you decide to make a bad decision, it hurts everyone,” he said. “One bad decision can mess your entire life up.”

Joni Coons, intramural programs coordinator, helped organize the safety event. She said if it helped just one student, it was worth the time.

“We want all of our students to put their best foot forward with summer right around the corner,” she said, “It was awesome to have the community’s support to show our students they need to be safe.”

Registration for the fall semester is underway. For more information about TSTC, visit tstc.edu. 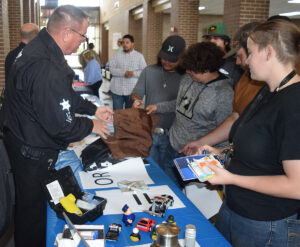