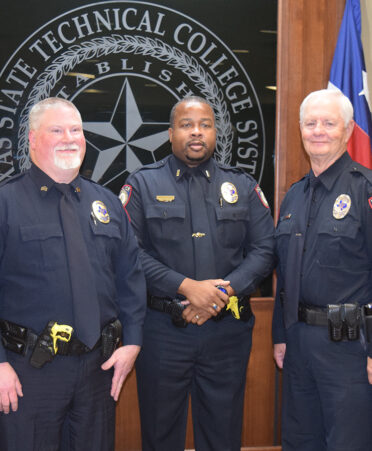 Nolan County Court at Law Judge David Hall swore in and congratulated the officers during the ceremony, which included members of the TSTC police department, campus administration and the officers’ families.

“I am extremely happy with the direction of our police department,” Westra said. “The camaraderie with my fellow officers is extremely high because our leadership was here to show their support.”

Westra said his mission as sergeant will remain the same as it was as an officer.

“We are here to keep our students and teammates safe,” he said. “When you are a police officer, your mission does not change. We are here to protect and serve.”

“He possesses the leadership qualities needed for this position. I know he will lead by example,” he said. “I know he will hold himself and others accountable.”

The TSTC police department recently reorganized from having separate departments at the Harlingen, Sweetwater and Waco campuses to a single department.

“We took the best practices from each department and became one,” Patino said. “We are going to continue to build a strong, cohesive and resilient team.”

TSTC Police and Safety Commissioner Aurelio Torres said honoring the officers during a ceremony was important. He said family members should be proud of their service to the college.

“Having officers working while you are at home is important. I know TSTC officers are doing their jobs to protect the campus and our students,” he said.

Patino also emphasized the importance of the officers’ families.

“In our profession, officers sacrifice their time away from the family,” he said. “Having that family support is crucial in performing the duties while on the job and to go back home safe.”

Leadership was the focus of the ceremony, and Patrick Brady, TSTC’s associate general counsel, offered several historical quotes on leadership, including one attributed to Aristotle.

“He who has never learned to obey cannot be a leader,” Brady quoted the philosopher.

Justin Price, associate provost of TSTC’s West Texas campuses, said the ceremony was a good day for TSTC and the Sweetwater campus.

“I am proud to stand beside you and call you my teammates,” he said.