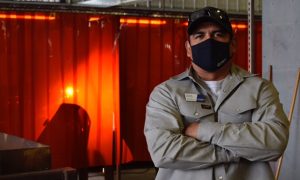 (WACO, Texas) – Edward Sanchez, of Hubbard, is proud to be a third-generation welder.

“It’s awesome with me being the first in my family to graduate from college and being an older, nontraditional student,” he said. “It’s a humbling feeling.”

Sanchez previously attended TSTC in 2000 to study Occupational Safety Compliance Technology, but did not finish the program.

He returned to TSTC in 2018 to pursue Welding Technology because he wanted to sharpen his skills, learn proper terminology and know how to break down materials. He completed a structural welding certificate in December 2019.

“It was nerve-wracking at first,” Sanchez said.

Sanchez cited Carl Wilmeth, an instructor in TSTC’s Welding Technology program, as an influence for his work. Wilmeth taught him in the first-semester class, Introduction to Blueprint Reading for Welders.

“He is known to be a man of integrity,” Wilmeth said.

Sanchez’s desire is to be a good example for his five sons, ages six to 19.

“I would like to see them get into a trade,” he said.

Sanchez grew up in South Waco riding bicycles with his friends, wading into creeks and playing video games at Safeway.

“We didn’t know what it was like sitting home playing Xbox,” he said.

Sanchez graduated from the “old” University High School when it was located on Valley Mills Drive.

He worked for eight years at Caterpillar in Waco before the plant shut down in 2017. He was a jack-of-all-trades, working where needed at the facility. The closure led to Sanchez’s going back to college.

The Mike Torres Jr. Leadership Award is given to honor the memory of Waco native Mike Torres Jr., who taught in TSTC’s Digital Media and Design program until his death in 2005. Torres graduated from Bishop Louis Reicher Catholic High School and TSTC’s Commercial Art Advertising and Integrated Digital Image program, according to the Waco Tribune-Herald.

The award signifies qualities that Torres was known for: courage, honesty and integrity. The award is given each semester at commencement to a candidate for graduation who is nominated by TSTC faculty and staff members. It was first given in fall 2011, according to TSTC archival information.